US VE-day version: The Soviets did not help win WWII 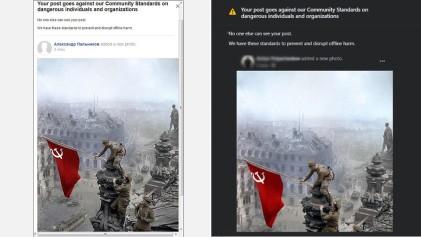 As I remember it, it was the same airbrushing under Barack Obomba, but I couldn’t easily find a citation, so…onward.

“The US is undertaking a major revision of World War II history, deliberately minimizing the contribution of the Soviet Union to the victory over Nazism, while painting countries that fought alongside Germany as Russian victims.

This is no oversight or simple historical illiteracy. It is part and parcel of a mobilization that is taking place in the United States today for a new, and more serious, confrontation with Russia.

On May 7, to mark the 75th anniversary of VE-Day, the US government issued two extraordinary statements. The first boasted as its authors US Secretary of State Mike Pompeo, and the foreign ministers of Hungary, Poland, Czech Republic, Slovakia, Romania, Bulgaria, Latvia, Lithuania and Estonia. Bizarrely, the statement had nothing to do with the liberation of Europe from Nazism, though perhaps less surprisingly, considering that both Bulgaria, Romania and Hungary actually started the war on the side of the Axis.

The statement veered off immediately into a familiar Cold War diatribe:

“While May 1945 brought the end of the Second World War in Europe, it did not bring freedom to all of Europe. The central and eastern part of the continent remained under the rule of communist regimes for almost 50 years. The Baltic States were illegally occupied and annexed, and the iron grip over the other captive nations was enforced by the Soviet Union using overwhelming military force, repression, and ideological control.”
[…]
“There was no mention of the fact that it was the Red Army that liberated every country that co-signed this statement with the United States. Most troubling of all was the menacing tone of the statement’s conclusion:

“Today, we are working together toward a strong and free Europe, where human rights, democracy and the rule of law prevail. The future should be based on the facts of history and justice for the victims of totalitarian regimes. We are ready for dialogue with all those interested in pursuing these principles. Manipulating the historical events that led to the Second World War and to the division of Europe in the aftermath of the war constitutes a regrettable effort to falsify history.”

Small wonder the Russians see it as the next iteration of the New Cold War.

‘Moscow promises Washington a ‘SERIOUS TALK’ about its V-Day message that omits Soviet Union’s role in defeating Nazis’, 10 May, 2020, RT.com

“The US officials have found neither the courage nor the desire to … do justice to the indisputable role of the Red Army and of the Soviet people, and to the enormous sacrifices they made in the name of humanity,” Russia’s Foreign Ministry said in a statement. It added that ignoring the historical facts due to current political likes or dislikes was unthinkable.

The Soviet Union bore the brunt of fighting Nazi Germany, with at least 27 million of its people killed in WWII. Few families were left untouched, and so celebrations of Victory Day and remembering that war’s tragic toll are still a big deal in Russia.

This is why many reacted with disbelief when media cited a message from the White House that said “on May 8, 1945, America and Great Britain had victory over the Nazis” and failed to even mention their Second World War ally, the USSR. The Twitter post with Donald Trump’s soundbite was soon pelted with tweets that graphically reminded the White House how it was the Red Army that took Berlin.”

1/2 We cannot neglect the commentary posted on the @WhiteHouse social media accounts where the #Victory over Nazi Germany is credited exclusively to “America and Great Britain.” https://t.co/6qnUo2VMja #Russia #US #UK #Victory75 pic.twitter.com/07kHJ3BbeL

2/2 Reasonable and fact-based comments are being regularly deleted. And this is being done in the “most democratic country,” which tirelessly proclaims its “adherence to freedom of speech”! Real historical facts may not be ignored. https://t.co/6qnUo2VMja #Russia #US #Victory75 pic.twitter.com/ylLcAFLQgL

This #US government-commissioned film explores the need for a Soviet-American alliance to defeat the Nazis. A must-see for all staffers in Washington DC preparing public statements about #WWII. Attempts to rewrite its history is an attempt to rewrite 🇺🇸history. Know your sources. pic.twitter.com/8XdeNFpd2K

💬 #Opinion by Maria #Zakharova: 'Call it what you want – falsification of facts, insult to common sense or rewriting of history. It is unacceptable that such a statement can be made by authorities of a nation that calls itself 'leader of the free world' https://t.co/2aC0TAPzyB pic.twitter.com/57qfBOXb7N

Like Loading...
This entry was posted in psyops and propaganda and tagged the USian version, VE day 2020. Bookmark the permalink.

4 responses to “US VE-day version: The Soviets did not help win WWII”