People gather in Barcelona, Spain, Sunday, June 7, 2020, during a demonstration over police violence.

‘The global protests and the fight against capitalism’, 8 June 2020, wsws.org

“Large demonstrations were held this weekend in London, Rome, Berlin, Vienna, Madrid, Paris, Lisbon, Warsaw and many other European cities. More than 12,000 people protested in front of the Norwegian parliament in Oslo on Friday. Protests were organized in Australia, India, Pakistan, Tunisia, and Mexico. Tens of thousands demonstrated across New Zealand last week.

The United States is the center of the world movement. Protests throughout the country are entering their second week. There have been substantial popular assemblies in every region and state. Some of the largest of these multiracial and multi-ethnic demonstrations have taken place in the Deep South, once the bastion of segregation, lynch law and political reaction.
…………………………………………….
The trigger event for this social upheaval was the murder of Floyd in Minneapolis, Minnesota on May 25. The staggering brutality of this crime horrified the public and generated an overwhelming mood of popular revulsion. But this latest killing, one of more than 1,000 committed by the US police every year, evoked such an eruption of popular anger because the United States was already a social tinderbox, waiting only for an event to ignite the explosion. The same situation exists in countries all over the world.”

“The largest demonstrations occurred in Germany, where at least 200,000 protested in a number of major cities on Saturday.

Due to the coronavirus restrictions, organisers of the demonstrations in Germany only registered a few hundred participants in each city. But they turned out to be among the largest protests in almost two decades. Around 30,000 people marched in Berlin, compared to the 1,500 who had been officially registered. Another 30,000 joined the protest in Munich, where only 200 participants had been registered.

Young people dominated the protests. At least 20,000 marched in Hamburg and Düsseldorf, while more than 10,000 demonstrated in Cologne, Frankfurt and Hamburg. Tens of thousands more joined major protests in Stuttgart, Freiburg, Nuremberg, Dresden and many other cities. In total, protests took place in 25 cities. 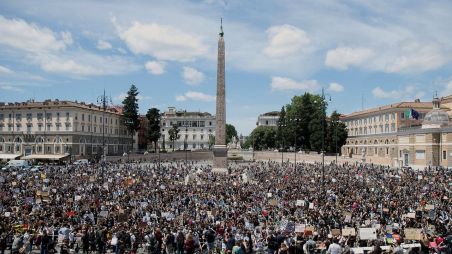 Many immigrants who participated drew attention to  the daily examples of racism they confront. Placards on many demonstrations recalled Oury Jalloh, who burnt to death while in police custody in a jail cell in 2005. One demonstrator in Berlin carried a sign reading, “What is happiness without equality?” In Cologne, one hand-made sign read, “Respect existence or expect resistance.”

In Berlin, the police blocked streets leading to Alexanderplatz, where most protesters were gathered. Acts of violence by police occurred in Berlin and Hamburg following the peaceful protests. Eyewitnesses told the WSWS that young people were kettled in Hamburg and attacked by baton-wielding police. Water cannons were also used to clear a square. Eye witnesses reported that 36 immigrant children and young people were detained overnight.
…………………………………………………..
While the largest protests took place in Germany, tens of thousands took to the streets across Europe. In Paris, over 5,000 people sought to make their way to the US embassy but were prevented from doing so by the police after the authorities banned the demonstration. Security forces sealed off the embassy with metal barriers and roadblocks. Major protests involving thousands also occurred in Bordeaux, Lille, Rennes, Marseille and Lyon.

In Britain, tens of thousands protested in London. A demonstration of at least 15,000 took place in Manchester, while large events were also reported in Sheffield (3,000), and Cardiff (1,000).

Yesterday, thousands of people gathered outside the US embassy in London for another protest. Many wore masks declaring, “Racism is a virus.”

Tens of thousands gathered in Amsterdam, the capital of the Netherlands, on Saturday. In Portugal, around 5,000 demonstrated in Lisbon. Outside the US embassy in Warsaw, Poland, a crowd of several hundred gathered to protest.

Protests also occurred in Italy. Around 1,000 participated in a march in Genoa on Saturday, while hundreds joined events outside the US consulates in Naples and Bari.

Protests continued yesterday in various countries. In Copenhagen, a crowd estimated at 5,000 gathered outside the US embassy. Thousands also gathered in Rome and Madrid, where Floyd’s last words, “I can’t breathe,” were chanted by demonstrators. In the Hungarian capital Budapest, over 1,000 people attended outside the US embassy with banners including “Police everywhere, justice nowhere.”

In Gothenburg, Sweden, the police violently dispersed a protest of over 2,000 people on Sunday afternoon. “The demonstration was great. It was a peaceful demonstration,” Ali Fadurieh, a demonstrator, told Göteborgs-Posten. The police claimed that social distancing was not being observed to justify the crackdown, which came just four days after similar repression against a protest of over 1,000 in Stockholm.

The weekend’s demonstrations across Europe followed a massive mobilisation of 50,000 people in the Austrian capital Vienna on Thursday evening.”

Two developments among many Stateside:

“The majority of members on Minneapolis City Council have announced that they are ready to commit themselves to getting rid of the city’s police department. The idea has become one of the rally cries of the ongoing protests.

Council President Lisa Bender broke the news during a rally in Minneapolis on Sunday, saying that nine of the body’s 13 members have so far got on board with the idea.

Speaking to CNN, Bender said that the council has yet to work out a plan for how exactly they want to uproot the police department, noting that “the idea of having no police department is certainly not in the short term.”

While Bender has provided scant details about the planned changes to the workings of law enforcement, she noted that funds earmarked for police would be funneled to cover other needs.
……………………………………………………
While the idea to either upend the police force entirely or drastically reduce its funding has been gaining traction on the back of the George Floyd protests, many have grown skeptical about the concept, sounding alarm that the proposal to replace them with a “community-led system” might lead to ultimate chaos that would hit the most vulnerable communities hardest.”

“New York will be shifting funds from the police to youth groups as part of reforms, Mayor Bill de Blasio announced, saying the Big Apple’s citizens “need to be reached, not policed.”

“We committed to move resources from the NYPD to youth and social services as part of our City’s budget,” de Blasio wrote on Twitter amid ongoing violent protests in New York and many other US cities, provoked by the death of African American man George Floyd in police custody in Minneapolis, Minnesota in late May.

“Our people need to be reached, not policed,” the mayor said, insisting that it would still be possible to keep New York safe.

He didn’t specify how much funding would be taken from the NYPD’s $6 billion budget and redirected, saying only that the “details will be worked out in the budget process in the weeks ahead.”
………………………………………………….
Earlier this week, Los Angeles Mayor Eric Garcetti promised to remove $150 million from the planned budget increase for the Los Angeles Police Department and allocate the money to youth jobs, health initiatives and “peace centers” for victims of discrimination. The mayor of Minneapolis was called on to resign by protesters after refusing to commit to defunding police.”

A question for Bill deBlasio:  How much does it cost your NYPD to maintain its IDF training offices in Israel? You might want to consider closing your office there, and pitching the savings into your ‘youth and social services’  line items.