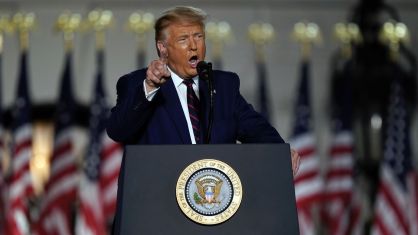 My apologies for featuring such electoral low-hanging fruit, but the authors do make their cases, but the surreal nature of it given the current police state background, including the ‘Opposition’s similar candidates…  (with permission from their site to repost their content at will, I’ll paste in the key passages.)

“In a scene that looked like a theatrical rendition of Sinclair Lewis’s It Can’t Happen Here, US President Donald Trump delivered a fascistic tirade from the White House lawn Thursday night, painting his reelection as the last bastion against “agitators” and “socialists.”

In an unprecedented and illegal move, Trump used the White House as a backdrop for his speech concluding the Republican National Convention (RNC), treating the office of the presidency as his own personal property in pursuit of reelection. At one point, Trump turned to face the White House and gloated, “The fact is, I’m here… and they’re not.”

Trump delivered his tirade as demonstrations against police violence continued throughout the country following the police shooting of Jacob Blake in Kenosha, Wisconsin. Trump spoke just two days after a fascistic vigilante, incited by the inflammatory speeches at the RNC, carried out a mass shooting at a protest in Kenosha that left two innocent people dead.

Trump’s response to the renewed protests has been to launch a massive crackdown. In Wisconsin, military police from three states–Arizona, Michigan and Alabama–are on their way or have already arrived to “assist” troops and thousands of militarized police from across the state in cracking down on protesters.

In his speech, Trump made clear his central appeal to the police, military and federal paramilitary forces, declaring, “We have to give law enforcement, our police, back their power.” He added, “My administration will always stand with the men and women of law enforcement,” before pointing to members of the Border Patrol union who attended the speech and calling them “brave, brave people.”

Trump continued, “This election will decide whether we save the American dream or whether we allow a socialist agenda to demolish our cherished destiny.” He declared that “Biden is a Trojan horse for socialism” and for “wild-eyed Marxists like Bernie Sanders.”

This right-wing fever dream stands reality on its head. In fact, it is Sanders who has completely subordinated himself to Biden, getting nothing in return for his endorsement.

The “Marxists” and “socialists” Trump is really afraid of are the masses of working people throughout the country who are disgusted with his administration’s murderous failure to contain the COVID-19 pandemic, soaring inequality and endless police murders across the country.

In his speech, Trump bizarrely praised his government’s response to the COVID-19 pandemic, simply ignoring the fact that a thousand people are dying every day, equivalent to two 9/11 attacks each week. He absurdly claimed that “the nations of Europe have experienced a 30 percent greater increase in excess mortality than the United States,” even though the US per capita death rate is twice as high as that of Europe.

Trump did not once mention the tens of millions of people left jobless by the economic crisis or the millions more facing hunger and eviction after the White House and Congress worked together to slash federal unemployment benefits, even as the wealth of the oligarchs soars to astronomical heights. 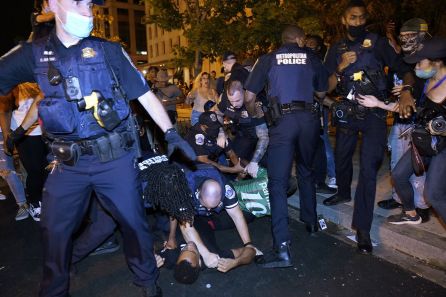 “In Trump’s telling, America is a terrestrial paradise, and if people are dissatisfied, it is because they are “agitators.”

Anyone watching this surreal scene will ask, how did this buffoon get anywhere near the White House? And how, after having killed 180,000 people, does he even have the prospect of reelection?

And yet, this outcome is quite possible. That is because Trump’s greatest advantage, as always, is the spinelessness of his Democratic “opponents.”

If there was a unifying theme to last week’s Democratic convention, it was the rejection of any appeal to the broad majority of the population and, in particular, the working class. The event, whose guests of honor were disaffected Republicans and generals, was almost entirely pitched to the Democratic Party’s target constituency in the wealthy suburbs.” […]

“In the final analysis, Trump is pursuing his conflict with the Democrats as a war, while they continue to see it as an “intramural scrimmage,” in the words of former President Barack Obama.

That is because, speaking as one of the two parties of Wall Street and big business, the Democrats are just as terrified of, and hostile to, the growth of mass popular opposition to capitalism as Trump is.”

I sucked it up and listened to part of DT’s hour and ten minute acceptance speech so you wouldn’t have to.  (Please pay the cashier $1.99 on your way out the door.)  The first nine minutes are: ‘A nation ordained by Gawd, Manifest Destiny & Westward Ho, We ended slavery, We won WWII, We’re winning over Covid, and will have a vaccine ready by the end of the year, our administration is on the ground helping the victims of Hurricane Laura’, etc.  FEMA on Twitter has the same ad up:

‘Just landed in Texas to assess the damage from #Laura here & in Louisiana. Even though we’re still fighting against #COVID19, we’re always ready to deploy to areas that need our immediate support.’, with a nifty little video along with it.

But I did want you to be able to hear 5 or 10 minutes of it in his own voice, in case you might choose to accept such an odious mission.

But no matter who wins the White House, it’ll be the Triumph of the Ruling Class, won’t it?

Like Loading...
This entry was posted in electoral politics and tagged DT @R Nat'l Convention. Bookmark the permalink.

7 responses to “Trump runs for Führer”