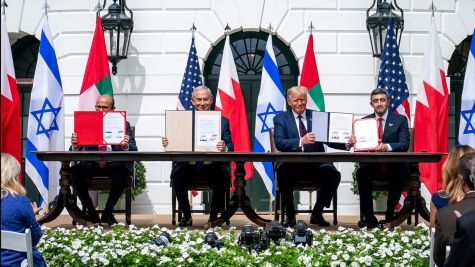 It’s really just more bellicose threats of war and war by other means for fun and profit, as Tehran and the Palestinians know all too well.

“The signing of agreements between Israel and the Sunni Persian Gulf monarchies of the United Arab Emirates (UAE) and Bahrain on the White House South Lawn Tuesday was proclaimed by US President Donald Trump as the advent of “peace in the Middle East without blood all over the sand,” and universally hailed by the media as “historic.”

All of this inflated rhetoric is designed to conceal the reality that the sordid deals inked in Washington are only part of US efforts to solidify an anti-Iranian axis for a potentially world catastrophic war in the region.” […]

“The proximity of the [above mentioned] anniversaries and Trump’s absurd preening and posturing Tuesday as the architect of the so-called “Abraham Accords” and a new era of peace in the Middle East recall nothing so much as Marx’s adage: the first time tragedy, the second time farce.” […]

“The deals signed Tuesday—a treaty between Israel and the UAE and a “declaration” of intent between the Zionist state and Bahrain, which was dragged into the process at the last minute without any formal agreement negotiated—have nothing whatsoever to do with “peace.”

In the first place, there has never been a shot fired in anger between the Gulf sheikdoms and Israel. Rather, the deals formalize what were already existing and barely concealed commercial, governmental and military ties between the venal and dictatorial Sunni Arab monarchies and Tel Aviv.

Among the most ludicrous features of Tuesday’s ceremonies was the pretense that the Emirati and Bahraini foreign ministers—Sheikh Abdullah bin Zayed Al Nahyan, a member of the UAE’s ruling royal family, and Abdullatif bin Rashid Al Zayani, former head of Bahrain’s viciously repressive security forces—represent the aspirations and interests of the Arab masses.” […]

“Nahyan represents an Emirati royal family that rules over a territory in which barely 11 percent of the population are citizens, with nearly 90 percent comprised of foreign migrant workers, most of them poorly paid South Asians who are brutally exploited under the shadow of dictatorial visa rules allowing for their summary expulsion.

As for Zayani, he speaks for Bahrain’s Sunni monarchy, which rules over a country in which 70 percent of the population consists of disenfranchised, poor and brutally repressed Shia Bahrainis, with opponents of the regime subjected to arbitrary detention, torture and death.”

And remember, the US Navy’s massive Fifth Fleet in anchored off the coast of Bahrain.  Wikipedia says :

‘More than 80% of the population of the United Arab Emirates are non-citizens. All Emirati citizens are Muslims; approximately 85% are Sunni and 15% are Shi’a. In the UAE you must wear appropriate clothing and act presentable.’

“While the Arab League had endorsed this initiative, when the Palestinians introduced a resolution condemning the UAE deal reached last month with Tel Aviv, the body voted it down.

If the House of Saud has not joined with its brother monarchs in the UAE and Bahrain in a “peace” pilgrimage to the Trump White House it is because of fear that such a naked renunciation of its own initiative and embrace of Israel could fatally undermine its claim to legitimacy, both internally and in the wider Muslin world. Nonetheless, there is no doubt that Riyadh gave its blessing to Bahrain—which is heavily dependent upon Saudi support—for its deal with Israel, and that the Saudi regime is itself collaborating closely with Tel Aviv, despite the absence of formal relations.

Palestinians demonstrated in the West Bank and Gaza Tuesday in a “day of rage” against the sham “peace” deals in Washington. Shawan Jabarin, the general director of Palestinian human rights organization Al-Haq, said that the deals laid bare “what has been clear to Palestinians for decades: Israel’s illegal acts of annexation and apartheid will not deter those in power from the pursuit of their own interests, to the detriment, if not damnation, of justice, accountability and human rights in Palestine.”

For his part, Trump thuggishly bragged about cutting off US contributions to assistance programs for Palestinian refugees because “they didn’t say nice things about us,” and suggested that the deals with the UAE and Bahrain would escalate pressure upon the Palestinians to capitulate.

Netanyahu, like Trump, aimed to use the White House ceremony to boost his domestic image under conditions in which he faces trial on charges of fraud, bribery and breach of trust and is confronting growing domestic opposition amid soaring COVID-19 infection rates and an economic crisis that has left 21 percent of the workforce unemployed. He kept the language of the deal with the UAE secret until the signing, fearing that its verbiage about foreswearing annexation of swathes of the occupied West Bank and supporting a so-called “two-state solution,” would alienate his right-wing base.

Netanyahu has insisted that annexation remains “on the table.” When he and Trump were asked about the issue at a press appearance shortly before the signing ceremony, the US president replied, “We don’t want to talk about that now.”

The idea that the agreements signed on the White House lawn were a step toward peace in the Middle East is belied by the continuing war threats by the US-led anti-Iranian axis in the region.

Teheran warned Washington Tuesday against making a “strategic mistake” after Trump threatened Iran over unsubstantiated reports that it was preparing to exact revenge for the US drone assassination in January of Iranian general and senior leader Qassem Suleimani by assassinating the US ambassador to South Africa. South African authorities dismissed the reports as baseless.

Trump had threatened Monday that any Iranian attack would be met with retaliation “1,000 times greater in magnitude.”

The Iranian navy reported last week that it had driven off US warplanes that had attempted to approach an area where Iranian military exercises were being conducted in the strategic Strait of Hormuz.

Military tensions have continued to escalate since Trump abrogated the Iranian nuclear accord [JCPOA] with the world’s major powers in 2018, imposing unilateral sanctions against the Iranian population that are tantamount to a state of war.” […]

“The chief impediment to peace in the Middle East is the protracted drive by US imperialism, under Democratic and Republican administrations alike, to assert its hegemony over the oil-rich region. Washington’s escalating campaign for regime change in Iran is aimed at denying the country’s resources and strategic position to China in preparation for “great power” conflict—i.e., a third world war.”

‘Where his family’s loyalty really rests -Why SEVEN TRILLION hard-earned US taxpayer dollars & so many American lives have been sacrificed. #IsraelFirsters have not just ruined our region—they’ve betrayed their own people, just for votes.

‘While @realDonaldTrump  admits the US thirst for war to fill the coffers of “those wonderful companies”, he’s been busy flogging their “beautiful military equipment” to our region. We get it. He thinks cold war is good for business while hot war is not. War is bad, period.’

‘Iran rejects nuclear weapons for religious & strategic reasons—far weightier than any “deal”. But if E3/EU want full implementation of CBMs & enhanced transparency that JCPOA provides, they should reject US #EconomicTerrorism just as they’ve rejected its vandalism in the #UNSC.

‘The US insists Iran must not: – Enjoy peaceful nuclear energy – Buy any defense equipment – Build defensive missiles Meanwhile, the US: – Spends $100B on new nuclear ICBMs – Builds secret “new” nukes – Floods regional clients with $380B+ worth of arms Hypocrisy: Breathtaking’

.@realDonaldTrump desperately needed a campaign photo. His son-in-law blackmailed their regional clients into giving him one.

The only problem: 'Peace agreements' being signed are NOT between foes but longstanding allies.

What a diplomatic coup!

Now he's trying to sucker him into mother of all quagmires by leaking a new false alarm.

Time to wake up. pic.twitter.com/2oBbbsWnxN

On the occasion of the New Year, I wish Iranian—and indeed all—Jews happiness, and most of all, good health.

The children of Adam, Abraham and Moses are siblings who deserve to live in a real democratic peace—not business deal. Our proposal has been #Referendum.

Like Loading...
This entry was posted in geopolitical matters, realpolitik, and tagged s abraham accords, trump. Bookmark the permalink.