Who will stop it?  Those who must…and can.  Stay tuned.

“In an alarming escalation of state retaliation against opponents of unending police violence and murder, at least six protesters, four of whom are members of the Party for Socialism and Liberation (PSL), were arrested by police and SWAT officers with the Aurora, Colorado police department on Thursday.

As part of an attempted frame-up, the protesters were arrested and jailed in a series of coordinated militarized raids while they were out in public or at home. Those arrested face a plethora of charges, which, if they are convicted, could mean decades in prison for their alleged roles in four protests and vigils against police violence that took place over the summer.

All those arrested have either organized or taken part in demonstrations in Denver’s largest suburb. The protests in Aurora are part of the global wave of multiracial and multiethnic protests by youth, students and workers following the release of video depicting the Memorial Day murder of George Floyd by Minneapolis police officers. Nine months prior to Floyd’s murder, Aurora police were facing widespread anger for their role in the killing of black 23-year-old Elijah McClain last year.

Everyone who was arrested in Thursday’s raids—Joel Northam, Terrance Roberts, Lillian House, Whitney Lucero, John Ruch and Trey Quinn—faces felony charges connected to four separate demonstrations held in Aurora on June 27, July 3, July 12 and July 25. A statement from PSL confirms that Ruch, Northam, Lucero and House are members of the party, while Roberts, according to the Denver Post, is the co-founder of the Front Line Party for Revolutionary Action.

A statement released by the PSL claims that Ruch was the first to be arrested while sitting in the parking lot of Home Depot. Later that same morning, five police cars surrounded and arrested Lillian House while she was driving. In the afternoon, Northam reports his home was invaded by SWAT teams and a Mine-Resistant Ambush Protected (MRAP) military vehicle, designed to withstand improvised explosive device (IED) attacks. In a PSL Facebook event discussing the arrest, members claimed that Northam was never shown a warrant. Lucero was also arrested Thursday afternoon.

As of this writing only one person has been released. The PSL is organizing a rally and march outside the Colorado state capitol in Denver today demanding that all the charges be dropped and their remaining comrades released.

The PSL has been among the groups organizing protests in the Denver metropolitan area throughout the summer, demanding justice for McClain. While the official sequence of events that led to McClain’s death might never be known—police purposefully shielded and removed their body cameras during the interaction—it is undisputed that McClain, who never committed a crime, was rendered unconscious after police applied a “carotid hold” to his neck.

Once paramedics arrived, the police lied about the sequence and character of events. McClain, who at this time was already handcuffed and had vomited after being choked out, was then injected with 500 milligrams of ketamine, a powerful sedative, by a paramedic with Aurora Fire Rescue. The dosage, nearly double the recommended amount for someone of his diminutive stature, caused McClain’s pulse and breathing to stop before he went into cardiac arrest. Three days later, after being declared brain-dead, McClain passed.

Afterwards, a cover-up ensued with an “independent investigation” finding no fault on the part of the officers or paramedics. An inconclusive autopsy report, which failed to determine the exact cause of death, conveniently left the state blameless.

Protests ignited in June after it was discovered that the “independent” city investigation into McClain’s murder was being led by attorney Eric Daigle, a former police officer in Connecticut who advertised himself on his website as someone experienced in “defending municipalities, police chiefs and individual officers from law enforcement liability claims.”

After over two million people signed a petition demanding a reopening of the investigation, Democratic Governor Jared Polis announced that his administration would reexamine the case. There are currently five separate investigations in McClain’s murder by various state and federal agencies. Millions of dollars and thousands of hours are being spent to give the appearance of “justice,” while at the same time Aurora police continue to assault, intimidate, maim and jail protesters, and McClain’s murderers have yet to spend a single hour behind bars.

In contrast to the police who killed McClain, the protesters who were arrested remain in jail after district attorneys stacked up to a dozen charges per person, a clear act of intimidation by the ruling class against all those determined to put an end to police violence and racism.

The charges are being spearheaded jointly by the 17th judicial district attorney, Dave Young (Democrat) and the 18th judicial district attorney, George Brauchler (Republican). The most serious and ludicrous were levied by Young against Northam, Lucero, and House, for their alleged role in “kidnapping” police officers outside the Aurora District One police station on July 3.

That day, hundreds of protesters had gathered outside the police station demanding the arrest of officers Nathan Woodyard, Jason Rosenblatt, and Randy Roedema. The protests were sparked after a photo was publicly released that showed three Aurora cops, Erica Maerrero, Jaron Jones and Kyle Dittrich, grinning and laughing as they reenacted choking McClain. The photo was sent to Rosenblatt who responded to the disgusting image with a text that read: “ha ha.”

The demonstration outside the police station went into the evening before riot police cleared the roughly 600 protesters with impact and chemical munitions. Attorney Young in his statement alleges that because protesters had surrounded the building, preventing police from leaving “for seven hours,” Northam, Lucero and House are responsible for attempting to commit first-degree kidnapping, a class 3 felony that carries with it a minimum 1-3 year prison sentence if found guilty.

While neither attorney has yet to file an affidavit, in a short statement, Young alleges that the three, “unlawfully and feloniously attempted to imprison or forcibly secrete 18 officers with the intent to force them or another person to make a concession to insecure their release.”

Finally, Roberts is facing riot charges, obstructing, and conspiracy to obstruct a highway as well as obstructing government operations. All told the six protesters face 33 felony counts and 34 misdemeanor charges.

In addition to the “stacking of charges” against the protesters, the manner in which they were arrested represents an escalation of the police-state tactics carried out by federal paramilitaries in cities such as Portland, Oregon, Spokane, Washington, Pittsburgh, Pennsylvania, New York and Kenosha, Wisconsin. These fascistic maneuvers, directed by President Donald Trump and Attorney General William Barr, are being dutifully carried out by police departments and federal agencies throughout the country, demonstrating the bipartisan attitude of the ruling class towards those who stand up to police terror.

However, those who think that a Democratic presidency under a Joe Biden administration would be any less vicious in their persecution of the working class would be sorely mistaken. Throughout the summer, Biden has condemned “anarchist,” “violent protesters” and “rioters” while remaining silent on the state assassination of Portland protester Michael Reinoehl. Biden, like Bernie Sanders, advocates increasing funding to murderous police departments while state budgets are being slashed across the country.

While a disproportionate number of minorities, particularly Native American and African-Americans, are victims of police violence, the determining factor if one is going to be a victim of police terror is that they are working class or poor. The police are the enforcers of the capitalist system. They defend the property rights and interests of the ruling class against all threats.

In the end, appeals to the capitalist state for reform or justice are less than helpful. Youth, students and all who oppose unending police murder must orient themselves to the social force which creates all of society’s wealth—the working class—in an international struggle for the abolition of the capitalist system and its replacement with a socialist society.”

Those arrested were movement leaders demanding justice for Elijah McClain, who was brutally murdered by the Aurora PD.

They are facing heavy felony charges – an obvious frame-up aimed at stopping the movement. IT WON'T WORK. #DropTheChargesCOhttps://t.co/dfPnQWZvoc

Salt Lake police gave indicated that they will release officer bodycam footage (if any) in the shooting, but not killing, of autistic Linden Cameron in mid-September. 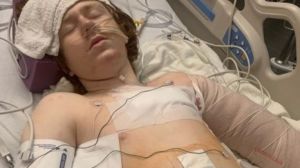 This entry was posted in police state. Bookmark the permalink.