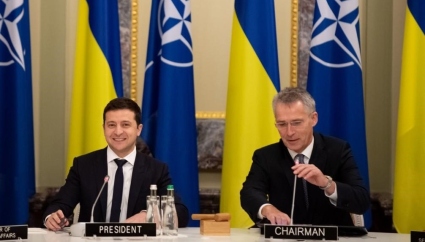 “The US-led NATO military alliance is moving ever closer to accepting Ukraine as a new member. This is an incredibly incendiary step towards war that could escalate into a nuclear conflagration.

Despite repeated and long-standing warnings by Russia, the US-led NATO military alliance has indicated it is moving ever closer to accepting Ukraine as a new member. This is an incredibly incendiary step towards war that could escalate into a nuclear conflagration. And, risibly, this reckless initiative is being driven by an alliance which proclaims to be about upholding peace and security.

This week NATO secretary general Jens Stoltenberg hosted Ukrainian prime minister Denys Shymhal at the organization’s headquarters in Brussels. At a joint press conference, both men were upbeat about Ukraine joining NATO. Stoltenberg admitted that the former Soviet Republic has been eyed for membership of the alliance since 2008, a timescale which puts more recent conflict over the past nearly seven years in perspective. He also confirmed that NATO forces have been building up their presence in the Black Sea in coordination with Ukrainian counterparts. In recent weeks, three US warships have been training with Ukrainian naval vessels in order to counter what Stoltenberg says is “Russian aggression”.

Officially, Ukraine is designated as an “Enhanced Opportunities Partner” by NATO. Which makes one wonder, ironically, what kind of “opportunities” are being contemplated?

For all intents and purposes, Ukraine is already virtually a member of NATO. It has participated in overseas joint military operations and, as noted, it receives military aid, training and logistical support.

But if Ukraine were to be formally admitted to the NATO alliance then that opens up a legalized and inevitable path to war. Under the organization’s rules, any individual member nation is entitled to invoke a general defense clause which obliges other NATO members to support militarily. Since the governing authorities in Kiev continually claim that Russia is an aggressor – a view shared by NATO – then the potential for a generalized war with Russia is a wide open danger if Ukraine were to officially join the alliance.

Undoubtedly, NATO leaders are aware of this potential catastrophe and are also well aware of Russia’s deep concerns. That would explain their cautious delay in admitting Ukraine to the alliance. Germany and France in particular are understood to be against adding the country to NATO’s membership out of fear that it would provoke Russia.

It is interesting to speculate why Stoltenberg – a former Norwegian premier and nominal civilian head of NATO – this week appeared to give new impetus to Ukraine’s ambitions. Could it be related to the change of administration in the United States? Senior members of the Biden administration have publicly stated during Senate hearings a willingness to increase military support for the Kiev government in its conflict with pro-Russian separatists in Eastern Ukraine. American and European envoys at the UN Security Council this week reiterated strident accusations against Russia claiming that Moscow was responsible for prolonging the conflict in Ukraine. Russia’s envoy Vassily Nebenzia countered that it was the Kiev regime and its Western allies who have not implemented the previously agreed Minsk peace accord signed in 2015.

But surely even the most diehard NATO jingoists must realize that admitting Ukraine to the ranks would be a dangerous bridge too far. The same too for Georgia, another former Soviet Republic, which is also in the queue for joining the military alliance. Both countries are already in political conflict with Russia because of NATO expansionism, not as they or NATO would have it, because of “Russian aggression”. NATO pushed Georgia into a brief war with Russia in 2008 over the disputed territories of South Ossetia and Abkhazia. Then in 2014, a NATO-backed coup d’état in Kiev against an elected president led to the ongoing low-intensity war in Eastern Ukraine. That coup also led to Crimea voting in a referendum to secede and join the Russian Federation which the West continually refers to disparagingly as “annexation”.

Professional, well-paid shills like Jens Stoltenberg like to spin the deluded yarn that NATO expansion is a “success” for democracy and the rule of law. Since the end of the Cold War in 1991 following the demise of the Soviet Union, NATO did not pack up and dissolve. In the ensuing 30 years it has doubled its membership from 16 to the present 30 constituent nations. This was in spite of earlier vows by American leaders that they would not permit NATO enlargement beyond the old frontiers of the Cold War and Warsaw Pact. The most recent additions include Montenegro and North Macedonia. Bosnia and Herzegovina are being considered under Membership Action Plans, and Ukraine and Georgia presumably after that.

NATO’s relentless expansion towards Russia’s borders, including the stationing of missile systems, in conjunction with baseless provocative, rhetoric accusing Moscow of aggression are patently posing an existential threat to Russian security. Yet NATO apologists talk blithely and in Orwellian fashion about promoting security, defense and rule of law.

Lest we forget, Russia came close to annihilation – within living memory – from military aggression by Nazi Germany and its eastern European satellites when up to 27 million Soviet people were killed in the Second World War (1939-45).

NATO’s own purported rules forbid the organization from admitting countries which are involved in border disputes or internal conflicts. That clearly should forbid Ukraine and Georgia. Yet the US-led NATO is turning a blind eye to its own rules, distorting its interventions in these countries as actions of defense against “Russian aggression”.

It would be ludicrous if it were not so gravely serious. NATO “justifies” the expansion to Ukraine and Georgia “because” Russia has forces in the Black Sea and the Barents Sea. Those regions are integral to Russia’s sovereign territory. This is while the United States from a distance of over 6,000 kilometers away stations B-1 strategic bombers for the first time in the Barents and sends increasing numbers of warships to the Black Sea in violation of maritime treaties. What next? Russia is accused of occupying Moscow?

The precedents and historical pattern show that the American imperial catspaw known officially as the North Atlantic Treaty Organization is incapable of intelligent reasoning and dialogue. It is a machine geared for confrontation. Russia may therefore have to consider using another form of language in conveying its wholly legitimate security concerns.

For the present trajectory is a road to perdition.”

And who has Biden tapped for his No. 2 at the Dept of State?  Cookie-gurl Victoria Nuland! 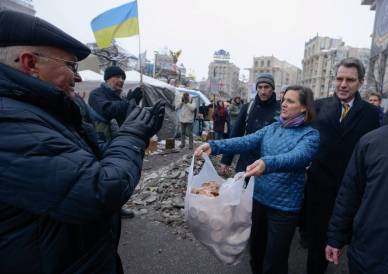 Do you think Zelensky is controlling his neo-nazis any better than Yats had?

a fun way to spend 49 seconds…

“Since Russia began its aggressive actions against Ukraine, Russian officials have accused NATO of a series of threats and hostile actions. This webpage sets out the facts.” (Note: each Myth includes from two to five paragraphs of “Facts”.

Myth 3: NATO Allies spend too much on defence

NATO Partners or ‘Partnerships for Peace’. [Colombia, South America, may be the most Machiavellian designation]

“The more the US pushes NATO as its vehicle, the more it is apparent that the battery of American power is running flat.” […]

“Under a new man in the White House – an old-time establishment operative – there is seemingly a more consensual approach with allies. Nevertheless, underlying the liberal lexicon there is the same old mantra of hostility towards Russia and China.

Lloyd Austin, the Pentagon chief, told European allies this week that there would have to be “more burden sharing” in order to confront the “threats” allegedly posed by Russia and China. Biden continued the same theme of confronting Russia and China during his G7 and Munich conferences over the weekend.

American hegemonic ambitions required to satisfy its corporate capitalism are dependent on a zero-sum geopolitics. The globe must divided into spheres of influence as in the earlier Cold War decades. There must be antagonism to thwart genuine cooperation which is anathema to American capitalism. Indeed, it can be said that the Cold War never actually ended when the Soviet Union dissolved more three decades ago. America’s imperialist ideology continued under new guises of “fighting terrorism”, “democracy promotion and nation building”, or more recently “great power competition” with Russia and China.

The bottom line is that NATO is more important than ever for enabling Washington’s global power ambitions given the demise of American capitalism and the rise of China and Eurasia. NATO provides a crucial political cover for what would otherwise be seen as naked American imperialism.”

Good to speak with President @ashrafghani of #Afghanistan. #NATO remains committed to our mission & supporting the Afghan security forces in their fight against terrorism. All sides must engage in re-energising the peace process to find a lasting solution.

Or: Someone’s got to guard their opium poppies!

Like Loading...
This entry was posted in geopolitical matters, realpolitik, and tagged more NATO expansion. Bookmark the permalink.