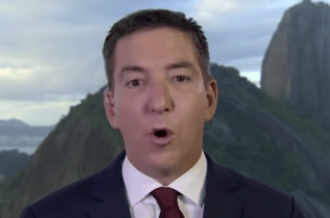 Frequently a contributor to Black Agenda Report, Paul’s new book is The Hollow Resistance: Obama, Trump, and Politics of Appeasement. These are excerpts from his recent column at counterpunch.org. It’s wide-ranging and longish, but I’ll focus on Part I:

Glenn Greenwald’s latest Substack essay shows how it is possible to be bright, seemingly progressive, stupid, and stealthily reactionary all at one and the same time – a common affliction of petit-bourgeois intellectuals who’ve never had a proper Marxist education.

Greenwald is referring, of course, to the recent kerfuffle about Alexandria Ocasio-Cortez wearing an expensive designer gown emblazoned with the phrase “Tax the Rich” at a pricey fundraiser (the “Met Gala”) for the Metropolitan Museum of Art in Manhattan.” […]

Now if only her gown had been emblazoned with the command to “Eat the Rich” instead…  ; )

“While radicals of the Left have long aligned themselves with the call for progressive taxation (the imposition of a disproportionate tax burden on those with high incomes and wealth), “tax the rich” is by no means a “revolutionary” and “socialist” demand. It’s a reformist call for enhanced equity that has long been advanced by corporate liberals seeking to preserve and stabilize the bourgeois order. Anyone familiar with elementary Marxist thought and writing and American history should know this. Progressive tax advocates Theodore Roosevelt and Woodrow Wilson were not fans and allies of Marx, Lenin, Rosa Luxembourg, and Eugene Debs.”

Later he quotes AOC’s statement after the Met Gala: “When we talk about supporting working families and when we talk about having a fair tax code, oftentimes this conversation is happening among working- and middle-class people. I think it’s time we bring all classes into the conversation.”