The New Pentagon “Law of War” Manual, STRATCOM as per Russia/Syria-Ukraine 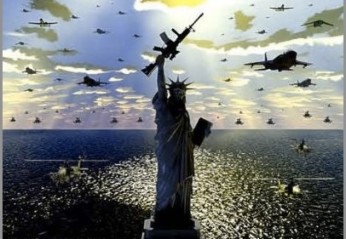 Please consider this an Open Thread.

Nomad had left this Robert Parry piece on a recent diary, and it, plus several internal links, bear more discussion than at the end of a very comment thread. ‘Obama’s Fateful Syrian Choice’ by Robert Parry at ConsortiumNews.com.

He opines that either Obama must work with Vladamire Putin to stabilize Syria, or opt for a confrontation that could quickly escalate.

He posits that in order to work with Putin, Obama would necessarily have to admit that the past several decades of “regime change” intervention strategies , including his own, have been strategic disasters.

I can’t agree, as many posit that all the US ever needs to back out of failed military intervention is some sort of “face saving” agitprop, and it seems to have begun already.

A recent post at Moon of Alabama notes that Obama is already blaming his failed ‘strategery’ on (wait for it, as per the NYTimes): Congressional Republicans and:

“The idea of bolstering Syrian rebels was debated from the early days of the civil war, which started in 2011. Mrs. Clinton, along with David H. Petraeus, then the C.I.A. director, and Leon E. Panetta, then the defense secretary, supported arming opposition forces, but the president worried about deep entanglement in someone else’s war after the bloody experience in Iraq.”

The Times seems to abet this idiocy and exonerates him.

But onward.  Parry’s belief is that he’s also have to alter some long-standing US alliances, and back away from the story that Assad had used sarin nerve gas in 2013, and blaming Russia endlessly, and offers some suggestions to the Prez and his administration.  But of key importance to his belief/theory:

“In retracting false allegations and releasing current U.S. intelligence assessments on those issues, the President would have to repudiate the trendy concept of “strategic communications,” an approach that mixes psychological operations, propaganda and P.R. into a “soft power” concoction to use against countries identified as U.S. foes.

“Stratcom” also serves to manage the perceptions of the American people, an assault on the fundamental democratic precept of an informed electorate. Instead of honestly informing the citizenry, the government systematically manipulates us. Obama would have to learn to trust the people with the truth.

Whether Obama recognizes how imperative it is that he make these course corrections, whether he has the political courage to take on entrenched foreign-policy lobbies (especially after the bruising battle over the Iran nuclear agreement), and whether he can overcome his own elitism toward the public are the big questions – and there are plenty of reasons to doubt that Obama will do what’s necessary. But his failure to act decisively could have devastating consequences for the United States and the world.

In a way, this late-in-his-presidency course correction should be obvious (or at least it would be if there weren’t so many layers of “strategic communications” to peel away). It would include embracing Russia’s willingness to help stabilize the political-military situation in Syria, rather than the Obama administration fuming about it and trying to obstruct it.”  (again, more is here)

“The NATO case and argument is that NATO’s approach to psy-ops is to treat it as an essentially open, truthful and benign activity and that, plus the elimination of any meaningful distinctions between domestic and foreign media institutions and social media, means that psy-ops and public affairs have effectively fused,” said British military historian, Dr. Stephen Badsey, one of the world’s leading authorities on war and the media.” [snip]

“And, as part of this Brave New World of “strategic communications,” the U.S. military and NATO have now gone on the offensive against news organizations that present journalism which is deemed to undermine the perceptions that the U.S. government seeks to convey to the world.

That attitude led to the Pentagon’s new “Law of War” manual which suggests journalists in wartime may be considered “spies” or “unprivileged belligerents,” creating the possibility that reporters could be subject to indefinite incarceration, military tribunals and extrajudicial execution – the same treatment applied to Al Qaeda terrorists who are also called “unprivileged belligerents.” [See Consortiumnews.com’s “Pentagon Manual Calls Some Reporters Spies.”]

Bradley notes strong objections from both foreign and domestic media, as well as mainstream and indie media.  He then goes on to show that this newly claimed right by the Pentagon only serves to codify decades of the same.  Some examples were familiar, but certainly not all, including Bill Clinton, Gen. Wesley Clark (a fave of many of the faux-librul left for President some time ago), Dubya bombing Al Jaeera in Bagdad and Kabul, and more.

As to ‘the war on journalists’, this piece at cpj.org (Committee to Protect Journalists) notes that after some very fuzzy and opaque definitions of ‘unprivileged beligerents’, plus offering no case law or treaties:

“This broad and poorly defined category gives U.S. military commanders across all services the purported right to at least detain journalists without charge, and without any apparent need to show evidence or bring a suspect to trial. The Obama administration’s Defense Department appears to have taken the ill-defined practices begun under the Bush administration during the War on Terror and codified them to formally govern the way U.S. military forces treat journalists covering conflicts.

The manual’s impact overseas, especially in the short run, may be even worse. The language used to justify treating journalists as “unprivileged belligerents” comes at a time when international law for conflict is being flouted by armed groups–including government, militia, and insurgent forces–from Ukraine and Iraq to Nigeria and the Congo–and during a time in which CPJ has documented record numbers of journalists being imprisoned and killed. At a time when international leadership on human rights and press freedom is most needed, the Pentagon has produced a self-serving document that is unfortunately helping to lower the bar.

The author, Frank Smythe, notes that the Manual does make these claims, however:

“The manual devotes attention to “classes of persons” who “do not fit neatly within the dichotomy” between combatants and civilians, and replaces the term “unlawful combatants,” which U.S. officials used to refer to terrorist suspects held under extra-legal circumstances in the wake of September 11, 2001 attacks, with “unprivileged belligerent.”

“Unprivileged” means the suspect is not entitled to the rights afforded to prisoners of war under international law and can instead be held as a criminal suspect in a category that includes suspected spies, saboteurs, and guerrillas.”

He quotes a Penatgon Official explaining (obfuscating?) the manual to the Washington Times, and then cites many egregious cases of past US wars on foreign journalists.

Consider what a war hawk  ’embedded with the troops’ Martha Raddatz became.  She would have had rights, goddamit!

But one wonders that given that Ukraine is another proxy war against Russia, if Nuland might have whispered into Poroshenko’s ear.  September 18, 2015 ‘Latest Censorship Move by Kyiv Bans 41 Journalists from Ukraine’, by Roger Annis

“On September 16, President Petro Poroshenko issued a decree banning 388 foreigners from traveling to Ukraine. The published list of persons banned was compiled by the National Security and Defense Council of Ukraine and dated September 2, 2015. They are deemed to be threats to the interests and national security of Ukraine.

The list included academics, political officials and journalists from countries across Europe. It includes 41 journalists and bloggers, including three from the BBC.”

He says that most of the 388 are Russian, and brings news that:

“The ban on the BBC employees was soon lifted by Poroshenko’s office. Two Spanish and one German journalist will also be removed from the list. Those whose bans were lifted are Anton Chicherova, Amy Wells and Steve Rosenberg of the BBC, Spaniards Manuel Angel Sastre and Jose Antonio Rodriguez Pampliega, and German Michael Rutz.”

After noting reactions from various media, this:

“Commentator Bryan MacDonald writes on RT.com, “If you were a PR adviser to Ukraine’s leaders and they asked you to compile a list of things they must not do, banning journalists would be high up there. Perhaps even at number one. While those who understand Ukraine know that the regime is even worse than its horrible predecessor, Western media has not reported this reality. Hence, the general public in Europe and North America doesn’t have the foggiest notion.

“Firing cluster bombs at civilians would be prominent too. Nevertheless, Kiev has already done that. Luckily for them, the western press doesn’t seem to mind.”

MacDonald notes the lame response by Western journalists to Poroshenko’s decree. “‘Worrying’, said Mashable’s Christopher Miller. Freelancer Oliver Carroll, frequently seen in The Independent, felt it was ‘quite a pickle’.”

Now one wonders if this is the self-same Christopher Miller who is the managing editor (iirc) at the Kyiv Post.

I’ve been saving links about Ukraine for a month, but it appears that the west has lost control of their Chocolate Puppet in many directions  including a MinkII agreement to provide for some autonomy in the Donbass (more on that later, or another day; I’m waaaay out of time for now).

NATO has long been a psyop, though, and I love watching and bringing their Tweets.  Many of been about ‘countering Russia propaganda’, including the pretense that the Right Sector neo-Nazis are just that, and now that Right Sector has been ginning up for Maidan 2.0.  Even the Guardian had admitted that a couple weeks ago.  But for instance:

“LONDON — As the first Russian combat aircraft arrived in Syria, the Obama administration reached out to Moscow on Friday to try to coordinate actions in the war zone and avoid an accidental escalation of one of the world’s most volatile conflicts.

The diplomatic initiative amounted to a pivot for the Obama administration, which just two weeks ago delivered a stern warning to the Kremlin that its military buildup in Syria risked an escalation of the civil war there or even an inadvertent confrontation with the United States. Last week, President Obama condemned Russia’s move as a “strategy that’s doomed to failure.”

But the White House seemed to acknowledge that the Kremlin had effectively changed the calculus in Syria in a way that would not be soon reversed despite vigorous American objections. The decision to start talks also reflected a hope that Russia might yet be drawn into a more constructive role in resolving the four-year-old civil war, etc.

Never mind that there seem to have been hope for a diplomatic solution in 2012:

“Russia proposed more than three years ago that Syria’s president, Bashar al-Assad, could step down as part of a peace deal, according to a senior negotiator involved in back-channel discussions at the time.

Former Finnish president and Nobel peace prize laureate Martti Ahtisaari said western powers failed to seize on the proposal. Since it was made, in 2012, tens of thousands of people have been killed and millions uprooted, causing the world’s gravest refugee crisis since the second world war.”

But he said that the US, Britain and France were so convinced that the Syrian dictator was about to fall, they ignored the proposal.”

And never mind that Russia seems to have been pressing this administration for their counterparts to meet…and solve the Syrian problem.

This entry was posted in empire and war crimes and tagged New Pentagon “Law of War” Manual, STRATCOM as per Russia/Syria-Ukraine. Bookmark the permalink.

17 responses to “The New Pentagon “Law of War” Manual, STRATCOM as per Russia/Syria-Ukraine”