Via Presstv (with video, ish):

“The government of Ukrainian Prime Minister Arseniy Yatsenyuk has survived a no confidence vote, hours after the president asked him to step down.

The motion got 194 votes in the Verkhovna Rada on Tuesday, falling short of the 226 votes required to oust the prime minister.

Earlier protesters rallied outside the parliament in Kiev calling for the resignation of Yatsenyuk over what they perceive to be his government’s failure to fight graft.

The protest was organized by the Ukrainian nationalist Svoboda party and the Party of Ordinary People.

Yatsenyuk’s government has come under increased pressure due to allegations of corruption and the slow pace of reforms.

Meantime, Ukrainian President Petro Poroshenko called on Yatsenyuk and the country’s controversial prosecutor general to resign because both had lost the public’s trust.

“In order to restore trust in the government, the president asked the prosecutor general and the prime minister to quit,” presidential spokesman Svyatoslav Tsegolko wrote in social media on Tuesday.

Yatsenyuk was a leading figure during Ukraine’s 2014 pro-EU changes and vowed to clean up the government by cutting its ties to shadowy tycoons.

Soon, however, people accused the former banker of defending the interests of the very same billionaires he had vowed to sideline.

A former lawmaker accused a close Yatsenyuk associate in December of receiving a massive bribe for giving the Czech company Skoda the right to provide equipment for Ukraine’s nuclear power plants.”  [snip]

Ukraine’s biggest political party said on Tuesday it will rate the performance of Yatsenyuk’s government as “unsatisfactory” in an imminent vote that could precipitate a collapse of the coalition government and snap election.

The risk of the Ukrainian government falling also threatens a massive IMF-led rescue package aimed at reviving the country’s shattered economy and slashing its reliance on Russian financial support. The International Monetary Fund (IMF) has warned that it may withhold aid to Ukraine if it does not carry out anti-corruption reforms.”

Now there’ve been plenty of Rumbles in the Rada over the past couple years, as well as Maidans 2.0, 3.0, etc., in which those same Right Sectorians and Svabodans marched, rumbled, and burned tires and such. 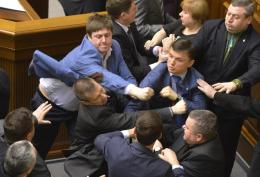 But one has to wonder if the IMF may have…er…suggested who the US puppet fall guy should be.  Clearly the West hasn’t totally given up on the Chocolate King, even though the buzz in May of 2015 was that

“The disastrous condition of Ukraine’s economy must also be focusing minds. The private intelligence company Stratfor, known as the ‘shadow CIA,’ noted that Nuland’s visit to Moscow “is the latest indicator” that Washington’s position on Ukraine and its role in the country’s future “may be shifting.”

After 18 months of ludicrously soft-soaping the regime, even the US mainstream press is suddenly highlighting Kiev’s problems with corruption. This increases the likelihood that Nuland has had a Damascene moment. It’s hard to imagine the US’ lap dog corporate media straying too far from the State Department line.”

But I digress.  I’d poked around for other versions of Yats’s government having barely survived a confidence vote, and yeppers, the Guardian had one yesterday, but gosh…there was no mention of Svoboda, fancy that.

I checked again this morning morning and found this brilliant Guardian editorial board opinion: ‘The Guardian view on Ukraine’s crisis: take the long view; Economic and political instability in Kiev is getting worse and Russia is poised to take advantage. But that’s no reason for doing nothing. On the contrary’

“That Ukraine’s path towards something approximating to liberal democracy would be winding and difficult was always obvious.”  (ho ho ha ha hee hee)

That its 40 million people have shown a lot of resilience in trying to reach that goal must, however, not be forgotten. As Kiev finds itself on the brink of a new political crisis, with its government surviving a vote of no-confidence, and the war still grinding on in the east, it is important to recall the wider historical backdrop.”

“Two years after the Maidan revolution, Ukraine’s slow pace of reform has without doubt created public frustration. The economy has tanked and the prime minister’s approval ratings have plummeted. Reformists in the government have struggled to overcome the deeply vested interests of oligarchic groups. Changes within the bureaucracy and the administration have been dismally insufficient. If the internal crisis continues, Ukraine’s backers will find themselves with new headaches. The International Monetary Fund has warned that a $40bn bailout might be put at risk.

A deepening political crisis in Ukraine could threaten the Minsk ceasefire agreements, whose full implementation (which was initially planned for December 2015) had already been pushed back to an uncertain date this year. While each side in the conflict accuses the other of not fulfilling its commitments, political events in Kiev could offer Russia a new pretext to refuse handing over the control of the border to the central government. The OSCE has recently spoken of “circumstantial evidence” that Russia is rearming the separatists.

(A bit like the UK report that ‘it’s likely that Putin ordered Litvinienko poisoned’, eh?)

“For all this, developments in Ukraine point to the need for more, not less, western and European focus. Both international financial assistance and diplomatic efforts should be kept on track if Ukraine is to be able to stabilise. With all the other problems facing Europe, that may be a hard sell. But it is in Europe’s interest to engage, not turn away.”

No mention of how freaking embarrassing it is that the Ukrainians can’t get their shite together, but had there been, it would have been: because Roosia.  No mention that it’s the Ukrainian militias who don’t honor the cease-fire, nor any mention of how important Ukraine is to US and Western bidness, or acting as proxies against Roosia, and NATO’s willingness for the ‘benighted nation’ to be placed under the NATO umbrella.

Looking around for other ‘opinions and facts’ about this kerfuffle, I found this interesting musing at Russia-Insider:

“As it was Yatsenyuk survived the no confidence vote as only 194 MPs out of a total of 422 voted to oust him.

An interesting fact is that MPs of the Opposition Bloc (the remnants of Yanukovich’s Party of Regions) largely did not vote to oust Yatsenyuk. Just 8 ouf of 43 did so. Which is to say it was within the power of Opposition Bloc to unseat him, but they chose not to.

We wonder why? Is it the case they decided they don’t want to give Poroshenko what he wants, especially as what he wants lately appears to be a government headed by Georgia’s ex-president Mikhail Saakashvili who is most famous for starting a war with Russia and cracking down on the opposition.”

Who knows how many Western businesses have ‘invested in Ukraine’ by now, and likely have received some sweetheart deals.  But it seems now that the original reason Monsanto had given to invest in Ukraine so heavily (as in: to develop non-GMO seeds and crops for the European market) was mooted in 2013.  Joyce Nelson at Counterpunch:

“Finally, a little-known aspect of the crisis in Ukraine is receiving some international attention.  On July 28, the California-based Oakland Institute released a report revealing that the World Bank and the International Monetary Fund (IMF), under terms of their $17 billion loan to Ukraine, would open that country to genetically-modified (GM) crops and genetically-modified organisms (GMOs) in agriculture.  The report is entitled “Walking on the West Side: the World Bank and the IMF in the Ukraine Conflict.”

It’s a long piece in which she unravels a lot of the related bidness schemes at play, and sadly her links to the report are broken, but this is key:

Then there’s Hunter Biden the youngest son of Vice President Joe Biden, who’d been appointed to the board of directors of Ukraine’s largest private-gas producer, Burisma Holdings, as head of the legal unit.  The WH had said: shut up there’s zero conflict of interest here.  Certainly nothing out of the ordinary, at any rate.  ;-)

On edit: I’d seen this JP Sotille interview on his Twitter feed, but hadn’t watched. He has a lot more on US-based multinational investment in Ukraine.

On a more somber note, this link may be the Russian documentaries on atrocities in the Donbass juliania had mentioned.  At Russia-Insider: ‘Circles of Hell: Shocking Film of Ukraine War Crimes, Sadistic Torture (Video)’; Torturing for the fun of it – a new film by a Russian NGO documents heinous crimes in eastern Ukraine

This entry was posted in empire and war crimes, geopolitical matters, realpolitik,. Bookmark the permalink.