Plaintive pleas from the women at Oceti Sakowin: ‘We are surrounded and need help; Feb. 22 is the Eviction Raid’ Update: ‘cleanup’ 9 a.m 2/23

It's difficult out here at the #NoDAPL camp. We are surrounded on all sides by the ArmyCorp, ND LawEnf, Nat'lGuard & the BIA Indian police,

Militarized law enf is a function, a violent enforcer of the will of capital. The corporate state is here; an oil war in the heartland.

Spiritual destiny compels liberation fr the logic of capital, debt, currency. At every opportunity we transcend, we resist, with our souls.

Thread of some of the #NoDAPL inspired resistance camps that are springing up opposing varied #pipeline projects https://t.co/L1LNLKo2sc

this is great news; reb z’s rubber-bullet hit hand is well enough to at least drive again, mebbe film a little?  here’s hoping the surgery brought it back to full use.

The new barricade (now 200yards from Oceti gate) seems to be a checkpoint so THEY can get in and out.#NoDAPL pic.twitter.com/Myx1qGoDeB

Listen to Nataanii Means and Witko’s “God Bless Amerikkka” on soundcloud; file under: ‘whoa, nellie, what a hella polemical indictment, and good on them!’

It’s hard to say if there are more than a handful of vets at the camps; from what I can tell, they raised a hella lot of money (VeteransRespond far less than VeternasStand4), but as far as the latter, this seems to be the only tweet referencing their current status, although it’s possible both groups are primarily on FaceSpook.  Michael Wood is busy elsewhere, albeit with a great project, so…I dunno how many might be in camp.  Just found VeteransRespond’s Facespook; members can look for more.  Ha; clicking #hustletoheal brings more photos and activities.  VeteransStand4 on FaceSpook.

#VetStand #AdvanceTeam
It's all coming together at Cheyenne River Sioux camp, but the 22nd is just around the corner. #TakeAction #NoDAPL pic.twitter.com/fIKAtAjBiC 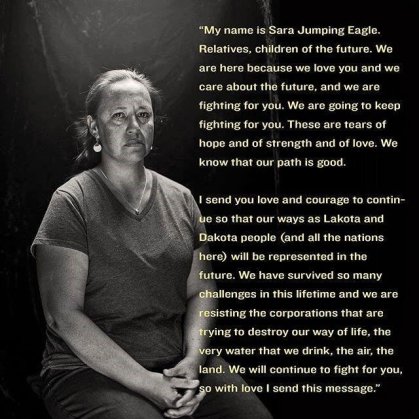 “North Dakota’s anti-protest bills are certainly aimed at Dakota Access Pipeline protesters, particularly in anticipation of increased backlash over the project’s imminent completion. However, they are part of a wider push by lawmakers and law enforcement in the United States to push back against a public that is increasingly vocal in its complaints against the governance in their communities.

Protests against Trump’s heavy-handed, fascistic administration, as well as protests against police violence, have gained traction throughout the US, and lawmakers have increasingly cooperated with law enforcement agencies to ensure that future protests are crushed as brutally and swiftly as possible. As in the rest of the country, legislators in North Dakota reveal the heightened intensity of class antagonism and the crisis of American bourgeois democracy.”

This entry was posted in police state, resistance under oppression and tagged #NoDapl. Bookmark the permalink.

19 responses to “Plaintive pleas from the women at Oceti Sakowin: ‘We are surrounded and need help; Feb. 22 is the Eviction Raid’ Update: ‘cleanup’ 9 a.m 2/23”