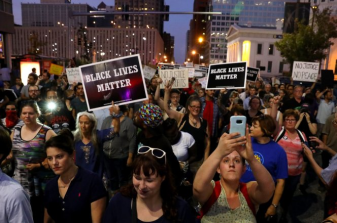 ‘White Allies Only Protest’
(Jason’s better, but still not up to snuff, so with some awkwardness, I’ll post this so he won’t feel compelled to answer more comments before he’s ready.)

(The outrage that led to these many days of protests, also by wsws.org):

“The 2011 killing of Anthony Lamar Smith by St. Louis police officer Jason Stockley was an open-and-shut case of police murder.

Smith was a 24-year-old African-American who was driving away from police after they burst in on what they claim was a drug deal. Stockley, who is white, was recorded on a dashboard camera saying, “I’m going to kill this motherfucker, don’t you know it.” Less than 45 seconds later, his partner Brian Bianchi rammed their police SUV into Smith’s car. Video of the incident shows that Smith remained in the car and made no attempt to flee.

Stockley jumped out of the SUV and shot Smith five times. Forensic evidence revealed that Stockley fired the “kill shot” from six inches away. The officer then returned to his vehicle, rummaged through a duffel bag and returned to Smith’s car to plant a throwaway gun on the dead victim. Tests showed the gun had only Stockley’s DNA on it.

In addition to his police-issued handgun, Stockley was carrying his personal AK-47 in violation of official department protocol.

Despite the overwhelming evidence, it took more than four years for prosecutors to charge Stockley. When he was finally arrested on charges of first-degree murder, another year and a half went by until last Friday’s not-guilty verdict, handed down by Missouri Circuit Court Judge Timothy Wilson.

Stockley’s acquittal has sparked a week of largely peaceful protests in St. Louis and the surrounding suburbs demanding justice for Smith and an end to police violence.

The violent and provocative response by riot police, including the “kettling” and mass arrest of protesters and the fascistic spectacle of cops chanting “Whose streets? Our streets!” reveals the real state of class relations in America.”

But back to Leigh and Gallanis at the top; the authors introduce their essay with:

“As police in full riot gear with batons in hand stood by, hundreds of peaceful protesters gathered in downtown St. Louis, Missouri Thursday evening on the seventh day of protests over the acquittal of white police officer Jason Stockley for the 2011 murder of Anthony Lamar Smith, who was African American.

In a marked shift from previous days of protest, Thursday night’s event was dominated by pseudo-left organizations promoting racialist politics. The protest was officially named a “White Allies Only” rally, where white people were asked to come out to support Black Lives Matter.”

Yes, that’s pretty creepy-bo-peepy, and much of the essay is by way of a hit on Socialist Alternative and Democratic Socialist of Amerika (DSA), and what Marxist dialectics brings to the issue of ‘race’.  This quote by an unnamed speaker does ballast their positions, as in ‘gatekeeping police murder’.

“Black Lives Matter representatives and Socialist Alternative members gave speeches throughout the protest during which one female speaker told the crowd of protesters, “Police need to be trained better. Had the St. Louis police department received better training, Smith would not be dead.”

Oh, they’re trained only too fully as an occupying military force, and in exactly the manner that they’re either told to respond to any sort of dissidence, and if they happen to assassinate anyone who fails to obey or totally submit to them, and if ever prosecuted, do so with impunity, over and over.  Two SCOTUS  decisions back them up, of course, mainly concerning the po-po’s “perceived threats to self or others” as exculpatory.

The authors state that DSA, Socialist Alternative, and BLM all operate within the world of the Democratic Party and insist that police violence is a product of racism, not classism.  And I agree that racism has always been an ideological tool of the ruling class, but it’s both.

“The renewed efforts from pseudo-left groups to remove the issue of racism from its real social, political and historical context are employed to obscure the fundamental class divisions in society and present racism as something pervasive, ineradicable and deeply embedded in the American psyche. Their real aim is to preempt the development of a broader, deeper and politically independent movement of the working class united across all racial, ethnic and national lines.”

They further not that of the eight killed by police in St. Louis so far this year (seven other shot, only wounded), two were white, six were black, but all were poor and impoverished working class people.

“The role racism often plays in any given act of brutality is more fundamentally rooted in the irreconcilable conflict between the interests of the ruling elite and those of the working class. This conflict has intensified alongside the explosion in social inequality throughout the US and the world and a quarter-century of unending US imperialism abroad.”

“At one point in the protest, organizers of the rally requested that all white protesters move to the front of the protest in order to deter possible police confrontations. According to Black Lives Matter, the purpose of “white allies” is to “amplify and recenter the lives of black people while standing in solidarity with the Black Lives Matter Movement.”

…as if the po-po are averse to trampling and smashing white people as well.  One commenter griped that #BlackLivesMatter signifies that white lives don’t, but I ain’t buyin’ it, due to the fact that #NativeLives and #BlackLives have never mattered unless a person climbed the ladders of political and economic ‘success’.

Now I can’t get the Guardian’s ‘the Counted’ site to go interactive for some reason, but I did dig up the Guardian noting that “Black males aged 15-34 were nine times more likely than other Americans to be killed by law enforcement officers last year, according to data collected for The Counted, an effort by the Guardian to record every such death. They were also killed at four times the rate of young white men.” (per capita)

Eleven of the Native Americans killed in 2016 were young males, meaning that this group was almost six times more likely than Americans at large to be killed by law enforcement.” (even though their sampling size was small, for obvious reasons like ‘no corporate news accounts.)

“Young black men were nine times more likely than other Americans to be killed by police officers in 2015, according to the findings of a Guardian study that recorded a final tally of 1,134 deaths at the hands of law enforcement officers this year.

Despite making up only 2% of the total US population, African American males between the ages of 15 and 34 comprised more than 15% of all deaths logged this year by an ongoing investigation into the use of deadly force by police. Their rate of police-involved deaths was five times higher than for white men of the same age.”

And yes, indeedy, the Ford Foundation did offer #BLM ‘organizations’ a million in funding last year, gate-keeping by capital, oh my, yes.  But this nation itself is racist see the people cavalierly murdered in its many wars, for instance, and the PoC imprisoned in a carceral state run amok for fun, profit, and ‘safety’ from the ruling class.  Of course the ruling class’s po-po reflect that, yes, even many black po-po..  A po-po of color simply zips on the suit of the white oppressors (save a few as below), and kills other blacks only too easily.  So the confluence of race and class and Amerikan Empire since 1776…is what it’s about, and yes to their Marxist analysis being that all of the working class should resist identity politics and rise up globally one day, but racists live and stalk the earth, not just Amerika. 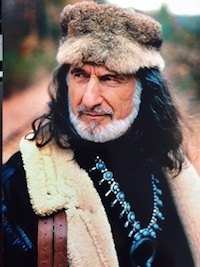 “This past August I received a call from NYPD Sgt. Edwin Raymond, one of the NYPD 12 suing the New York City Police Department. The officers had been ordered to violate their oath of office by engaging in a quota system targeting minorities and people of color. Former NYPD Police Commissioner William Bratton went on record to ceremoniously state on national television that the officers charges were “bullshit” repeating the epithet twice for the benefit of those who could not believe his eloquence.

The problem is that the public is so conditioned that they would readily take the word of a white police commissioner over that of a black patrolman; at least he had hoped so. Fortunately these black officers, tired of the rhetoric and abuse, had the wisdom to take advantage of our modern technology and recorded the words of their commanding officers ordering them to violate the law and abuse the very  people that law was intended to protect. Their recordings thus exposed the police commissioner as the one treading in the cattle pasture.

Edwin asked me if I would join him and roughly another 100 black officers at a rally supporting NFL player Colin Kaepernick’s objections to police abuse and inequality.” (he did, and zounds: what exceptions to the rule, good on them!) [snip]

“Before we can move forward as a nation we have to face the painful truth that we are a people divided by double standards. Without truth there can be no justice, without justice there can be no peace.  A better world is possible.”

Glen Ford on TRNN (the transcript)

“EZE JACKSON: Yes, sir. Glen, I want to start by getting your response to what the Circuit Judge, the Circuit Court Judge, Timothy Wilson said when he ruled in the officer’s favor on Friday. He said, quote, “An urban heroin dealer not in possession of a firearm would be an anomaly.” What’s your response to this?

GLEN FORD: That’s the most important quote and it reveals volumes. It goes to the heart of the criminal injustice system in the United States.

First of all, what’s been going on in the streets of St. Louis over the past couple of days is all about power. It is not about justice, and if you don’t believe that, then just ask the police. The corporate media have been reporting that formations of cops were chanting, “Whose streets? Our streets,” as they swept demonstrators off of those streets and the interim Police Chief himself declared, and I’m quoting him here, “I’m proud to tell you the city of St. Louis is safe and police owned tonight.” In other words, the police own the streets. It’s their streets, like they said. Those are the words of an occupying army, and those words have nothing to do with justice.

One cool thing was that Concerts by U2 and Ed Sheeran were canceled last weekend amid security concerns.  #ShutItDown!

Killed by Police on Facebook has counted corporate news accounts of 884 citizens so far this year killed by the po-po.

I know opinions may differ; feel free to add yours at will.