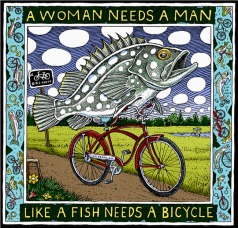 I’m not a card-carrying feminist, but more of the accidental feminist variety.  I’d reluctantly gone to two women’s lib meetings when I was at CU, and thought: meh; how very revolutionary to burn yer bras.  The accidental part concerns the fact that I labored in many traditionally ‘male only’ venues: construction crews, learned carpentry, worked ‘maintenance’ for the City of Cortez to make enough money to go to massage therapy school, later built a house with Mr. wd, learned to lay river rock,  cold-chisel paving stones, and all that.  I got my first construction job after being pinched in bum by some asshat where I was waiting tables in Breckenridge, CO; I said fukkit, threw my apron on the bar, and got the hell outta there.
Luckily, Mr. wd is also by way of an accidental feminist, and taught me a few more tricks of the trade when we built our house, and was hired by a number of lesbian couples to build their houses, and most especially to teach them and their female friends how to build: plumb, square, measure, cut, and fasten.  When I found a vintage T-shirt with the logo above in our local thrift store a decade ago, he had a hella lot of fun wearing it.

But more seriously, when I read the following exposé, it nearly blew the top of my head off.  I’m not on Facebook, so I can’t peek in to any of the following on Julian Vigo’s page even if I knew which one of the dozen were hers.  But I do trust that all of the conversations actually happened.  What I’d like to know is if readers have any idea how ubiquitous this ‘radical feminist misandry’ has become.  Unless I miss my guess, it pre-dated the #MeToo movement having gone full-tilt McCarthy wild, but…easily my guess may be wrong.

“According to Greek myth, the King of the Titans, Cronus (Latin: Saturnus), heard a prophecy that one of his children would overthrow him.  In response to this prophecy, Cronus, father to the gods Demeter, Hestia, Hera, Hades and Poseidon by Rhea, devoured his children as soon as they were born to prevent his loss of power.  Zeus narrowly escaped this fate as Zeus’ mother fed Cronus a rock dressed in baby clothes which Cronus assumed was his.”

“Through artistic representation, the myth of Cronus has come to be understood as a conflict between youth and old age in addition to those with power who fear losing it to the younger generations.

This story of Cronus is what came to mind this past week when I found myself set upon by dozens of so-called “radical feminists.”  I am obliged to put this term in quotation marks to refer to these women since this brand of radical feminism seems to have been hijacked by individuals who are very much out of touch with what feminism is about (eg. women), much less anything related to the tenets of radical feminism.   By all accounts from what I have witnessed this past week, what these women believe to be feminism is merely a vindictive table-turning of history, dare I say a buffet of those women who are in any way tainted by their proximity to the male body—especially those women who have not spawned Satan’s seed: the male child.” 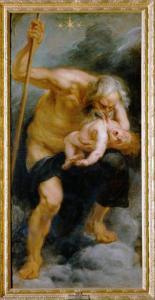 The author writes that the beginning of this high-octane contretemps occurred when she’d been considering going to a feminist even this summer, and given that she’s a single parent with two small children, she’d written to the organizers asking if she could bring them along, especially as it wasn’t local, so would involve more than a single day.

“This is the exchange I posted on my Facebook wall:
‘I just received this as an email for a “feminist” event:

“It is a female-only space so we do not allow male children.”

My response: “You have just written the most fucked up email I have ever received in my life. Happy not to attend. Wow!!!”

From this post I received comments like, “Why is that fucked up?” where I was expected to explain to an adult female who considers herself a feminist why barring a two-year old because he is male might present a moral problem for any group which not only calls itself “feminist” but which seeks to liberate all females from sex-based oppression whereby the mothers of these children are necessarily excluded.  The irony in posing such a question made my head reel, but no sooner could I realize the incongruence of this assertion did another woman write, “I actually don’t understand, either. I’m not being snarky. I really don’t see why it’s wrong to have female-only spaces.”  I had to underscore many times in these conversations that my objection had to do with being asked not to bring a two-year-old male to a feminist event, not the fact that, as per many social events, children in general were not welcome. My disagreement had nothing to do with “female-only spaces,” but dealt with the more serious matter of excluding small male bodies because of some deeply prejudiced views of males from birth.”

Vigo writes that she proceeded to inform these women that she’d had to quit various Facebook groups in the past because some feminists had actually promoted the abortion of male fetuses to counter the injustices of historical femicide and misogyny.  Apparently she wrote that barring male children from the event was analogous to that sort of eugenicsism, and protested the ‘demonization’ of male bodies as a political strategy, and good on her!

“I even, somewhat ironically, invoked the term “feminazi” demonstrating how a word so often misused by men’s rights activists, actually makes sense in this specific context of willing and orchestrating away males as a class, all under the guise of “safe spaces.”  Certainly, “female-only spaces” is the lie these “feminists” tell themselves to commit to an essentialism of male guilt through birth.

Some women chimed in stating that small boys under five should be acceptable to bring, but such sentiments were rarely allowed to remain unchallenged with others angrily writing about male babies “tak[e] the attention from their mothers,” that female babies “deserve to have female-only spaces,” that “[w]omen have the right to not want penis-having people of any age, in a group or gathering,” and one woman even maintained that young boys “absorb misogyny.”  It is as if these women emerged from medieval alchemy whereby the site of evil, the male as misogyny par excellence, is the contagion and not the social and political structures into which we are all inculcated.” [snip]

Here are a few disgusting (and bogus in the extreme) examples she narrated:

‘5 year olds, and even toddlers rape’; ‘a 2-year-old my feminist friend was baby-sitting grabbed at our breasts with a creepy smile on his face, as in sexist-creepy objectification of women’.

Now a rational person might conclude that a two-year-old had been imagining breasts as a source of nourishment, not sexual conquest/objectification, but how very Freudian Oedipal Complex of them, speaking of Patriarchs…

As Vigo had tried to dialogue with the various misandrists, while noting that feminism about (institutionalized, I’d say) structuralism, not individuals, she was subjected to accusations of ‘patriarchy 2.0, such as ‘the mothers of males exulting in their privilege’; ‘the world is being destroyed by males, and we’re running out of time!’; and her being an example of ‘the cult of motherhood worship’; and as for being ‘hand-maidens for patriarchy sympathizing with their natural attachment ‘to our male offspring which clouded our ability to “sympathize” with women who wanted no “penis-bodied” individuals in their midst’; and my paraphrasing of a UK feminist she’d met with in , bringing her chirren along: ‘you must have been raped to have birthed these spawns of the devil’.

“Apparently there is a whole mini-cult of these “feminists” who pop about the Internet to inform women that all males are tyrannical, to include boys.  A few such feminists have actually written a book about how males are “inherently dangerous” with a chapter entitled, “Boys Oppress All Females.”  The authors of this text promote the belief that males are naturally oppressive, noting that giving birth does not mean that a female is not “bringing another rapist into the world” and ”that no matter what you do, if you have a boy, he will likely terrorize and assault girls and, later, adult women and Lesbians, and likely will be a rapist.” This text is comedy gold!”

Ack!  So Judas Priest, I say let’s go full-tilt King Herod on them, let the gods sort it out later…

The irony of demanding a space free of wee penises where “women could freely love women” wasn’t lost on her.  She did spend many further paragraphs noting the solidarity she’d received from like-minded women after the hideous kerfuffle.  As in: feminism is a political theory, not a revenge action against males.  She finishes with:

“This off-label brand of radical feminism has driven away women because of its very internalized hatred of men—women who are polluted by their physical proximity to males, reproduction, and their male children. Such political narratives fracture any sense of solidarity and ultimately prevent any type of revolutionary action.  We’ve seen this story before–and it isn’t a political narrative. It’s a religion.”

This entry was posted in social commentary/prediction and tagged julian vigo and feminist misandry. Bookmark the permalink.

18 responses to “How prevalent is radical feminism’s misandry problem?”