“Though the announcement is couched in terms that make it seem humanitarian, as potentially a huge advance in science, an agency tied to the British government is encouraging efforts in gene-editing of the DNA of human embryos. It belongs in the category of eugenics. Not surprisingly, the footprints of Bill Gates and the Rockefeller eugenics circles, and major pharma groups as well as GMO seed companies are found here.

[See ‘Gene Editing for Good; How CRISPR Could Transform Global Development’, Bill Gates, foreignaffairs.com] Oh, what an evil putz you are, Sir Waiting for Superman.  What a sick and ungodly vision for global development you have!

“The report and the people behind it, including the Government’s Medical Research Council, indicate that a major push is underway to convince the public that genetic manipulation of human embryo DNA, so-called gene editing, is desirable and beneficial.

Among its conclusions the report states, “use of heritable genome editing interventions to influence the characteristics of future generations could be ethically acceptable.” It adds that, “research should be carried out on the safety and feasibility of heritable genome editing interventions to establish standards for clinical use.”

With many sentences stressing that the decision should only be licensed “on a case-by-case basis subject to assessment of the risks of adverse clinical outcomes for the future person,” by a national competent authority; and “strict regulation and oversight,” the report opens a Pandora’s box of eugenics issues, the long-standing agenda of circles such as the Rockefeller Foundation, Rockefeller University, Bill and Melinda Gates Foundation and others.

The focus is use of new technologies for gene editing, including CRISPR-Cas9, to “alter a DNA sequence(s) of an embryo, or of a sperm or egg cell prior to fertilisation.”

[My understanding is that an embryo IS a fertilized egg, but moving on]:

“The aim would be to influence the inherited characteristics of the resulting person.” They elaborate, “We refer to these as ‘heritable genome editing interventions’ since the altered DNA may be passed to future generations…” The scientist who first suggested developing gene drives in gene editing, Harvard biologist Kevin Esvelt, has publicly warned that development of gene editing, in conjunction with gene drive technologies, have alarming potential to go awry. He notes how often CRISPR messes up and the likelihood of mutations arising, making even benign gene drives aggressive. He stresses, “Just a few engineered organisms could irrevocably alter an ecosystem.” Esvelt’s computer gene drive simulations calculated that a resulting edited gene, “can spread to 99 percent of a population in as few as 10 generations, and persist for more than 200 generations.”

“Gene drives are a controversial new technology that uses CRISPR-Cas9 to spread a specific genetic trait through an entire species or population – in some cases with the purpose of driving species to extinction. Current gene drives experiments have been conducted on insects, rodents and plants. If the inserted genetic trait results in only male offspring, as is being attempted for rodents and mosquitoes, a full wild population or even a species could go extinct. As far as is known, gene drives have never been released into the environment anywhere in the world.

“Gene drives organisms pose unique threats to nature and livelihoods”, says Silvia Ribeiro, Latin America Director for ETC Group. “It is the first time that the biotech industry has intentionally designed GMOs to spread aggressively in the natural environment and contaminate wild species. It seems surreal that a decision to impose such great dangers to a mega diverse country such Brazil would be taken by a small technical commission, without even involvement of either Congress or civil society”. [snip]

“Because of the technology’s power and inherent risks, Gene drives are considered a potential bioweapon. According to 1,200 emails released under access to information requests by a group of civil society organizations, the US Military has become one of the main funders of gene drives research at the global level. (They acknowledge the potential use as a bioweapon but allege that their interest is only defensive.) The second biggest funder of gene drives is the Bill and Melinda Gates Foundation, which claims to be supporting the development of the technology to combat pests, such as the mosquitoes that carry malaria, by genetically eliminating their ability to reproduce.”

Back to Wm. Engdahl:

“Also notable is the CEO and Director of the Francis Crick Institute, Sir Paul Nurse, geneticist and former President of the Rockefeller University in New York. In 2009 Nurse hosted an exclusive meeting at the Rockefeller University of hand-picked billionaires, invited by Bill Gates and David Rockefeller, to discuss the problem of “over-population.” They reportedly called their group The Good Club, and it included, according to reports, billionaire financiers Warren Buffett, George Soros and Michael Bloomberg.

The fact that today the same Sir Paul Nurse heads one of the world’s largest and best financed biomedical laboratories where they are doing gene editing of “donated” human embryos, suggests that a very dangerous agenda is being advanced under the banner of gene editing. And the fact that Bill Gates and his huge foundation, a major investor of Monsanto (now Bayer AG), have been funding experiments in gene editing for more than a decade, including CRISPR, suggests that gene editing could soon become a new name for human eugenics.”

And from Jacob Levich’s ‘The Real Agenda of the Gates Foundation’, Café Babylon version, caucus99% version), a few squibs:

“IV. A Broader Agenda“Behind BMGF’s coordinated interventions in pharmaceuticals, agriculture, population control, and other putatively philanthropic concerns lies a broader agenda. In a recent interview Bill Gates briefly strayed off-message to warn of “huge population growth in places where we don’t want it, like Yemen and Pakistan and parts of Africa.” His use of the majestic plural here is revealing: in spite of much rhetoric about “empowering poor people,” the Foundation is fundamentally concerned with reshaping societies in the context of ruling-class imperatives.”

The Bill and Melinda Gates’ foundation gave $4.6 million to the Massachusetts-based startup behind the device, MicroCHIPS in January of 2014, a long-lasting implantable birth control device that can be turned on and off with a remote control [thus hackable]. With this device — a tiny hormone-emitting microchip — women who decide they are ready to conceive can essentially flip a switch and start trying, according to the MIT Technology Review.”   Bill Gates had suggested creating the device to MicroChips.

“Bill and Melinda Gates “are particularly committed to exploring how our family planning efforts can meet the needs of young women and girls.”  [As evidence, Bill had once tweeted Melinda’s heavy anxieties over watching those African women walking about, and simply loaded down with chirren had made him a devotée of ‘family planning for…women who could become part of the consumer society, earn $, and even get their own bank accounts, even, without those human burdens.]

“Presumably, the birth control microchip is still being tested. Though where, and by whom, remains largely a mystery. The question is troubling, especially considering the Gates’ ongoing interest in vulnerable, impoverished nations. It is also yet unknown how the device is performing, and how much longer before it gains FDA-approval and becomes available to women in America.”

Is it already available in sub-Saharan Africa? But good on them, as the Gates Foundation often tests products on the unwitting in order to speed up the testing process (see also Jacob Levitch, Part III.Gates and Big Pharma:
“Guinea pigs for the drugmakers”

‘Genetically modified babies given go ahead by UK ethics body’; The Nuffield Council on Bioethics says changing the DNA of a human embryo could be ‘morally permissible’ if it is in the child’s best interests, the guardian.com  Some excerpts:

“But the report drew immediate criticism from some quarters, with one lobby group accusing the authors of opening the door to the unrestricted use of heritable genetic engineering, and an age of genetic haves and have-nots.”

“The prospect of modifying genes in human embryos has long been controversial though. For a start, the procedure has yet to be proven safe. In a study published in Nature Biotechnology on Monday, British researchers found that the most popular tool for genome editing, Crispr-Cas9, caused more damage to DNA than previously thought. If the scientists are right, gene editing could disrupt healthy genes when it is meant only to fix faulty ones.”

“Marcy Darnovsky at the Center for Genetics and Society in California said that the report recognised that if reproductive gene editing was permitted, it would be used for enhancement and cosmetic purposes. “They dispense with the usual pretence that this could – or, in their estimation, should – be prevented. They acknowledge that this may worsen inequality and social division, but don’t believe that should stand in the way. In practical terms, they have thrown down a red carpet for unrestricted use of inheritable genetic engineering, and a gilded age in which some are treated as genetic ‘haves’ and the rest of us as ‘have-nots’.”

From bbc.co.uk , 17 July 2018:  ‘Editing human embryos ‘morally permissible, Should we or shouldn’t we be allowed to modify human DNA in future children?’

“The use of genome editing in embryos for assisted reproduction in humans is currently prohibited by UK law, but is permitted in some research. Scientists can do gene editing on discarded IVF embryos, as long as they are destroyed immediately afterwards, for example.”  (And you can betcher bottom dollar that they’re all destroyed after seven days.)

“Commenting on the Nuffield Council of Bioethics’ review of genome editing, Dr David King, Director of Human Genetics Alert, said: “This is an absolute disgrace. We have had international bans on eugenic genetic engineering for 30 years. But this group of scientists thinks it knows better, even though there is absolutely no medical benefit to this whatever. The Nuffield Council doesn’t even bother to say no to outright designer babies. The people of Britain decided 15 years ago that they don’t want GM food. Do you suppose they want GM babies?”

[And again: “Gene drives are a controversial new technology that uses CRISPR-Cas9 to spread a specific genetic trait through an entire species or population – in some cases with the purpose of driving species to extinction, and/or as bioweapons.”]

None of the reports had mentioned ‘UN panel warns against ‘designer babies’ and eugenics in ‘editing’ of human DNA, Warning that rapid advances in genetics make “designer babies” an increasing possibility, a United Nations panel today called for a moratorium on “editing” the human genome, pending wider public debate lest changes in DNA be transmitted to future generations or foster eugenics’, news.un.org, Oct 2015

“In 2004, former Secretary-General Kofi Annan questioned whether such processes might promote a world dominated by eugenics like that imagined by Aldous Huxley in the novel Brave New World.

“The greatest fear is that we may be trying to ‘play God,’ with unforeseeable consequences, in the end precipitating our own destruction,” Mr. Annan warned then, asking whether the dangers outweigh the benefits and where the line should be drawn between what is feasible and what is desirable or ethical.” 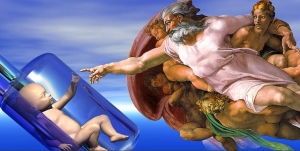 But if this mid-summer iteration is taken to the UN for discussion, who pays attention to the UN anyway?  Aside from that, which nations and Lords of Philanthrocapitalism  can exert muscular influence on the UN?

But: what could possibly go wrong?  (Or right, depending on one’s point of view and ultimate goals…) 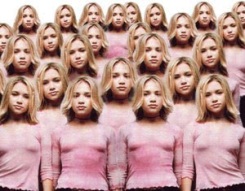 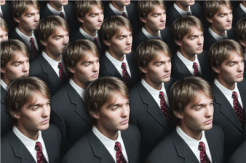 There are more than a billion women who don’t have access to a bank account. Here’s why that needs to change. pic.twitter.com/wbyB3ReN3q

I love meeting community leaders like Ibu Suparti, who uses tablets to teach women about family planning in Indonesia. Tech has enormous potential to improve lives worldwide—and I look forward to helping unlock it as co-chair of the @UN High-Level Panel on #DigitalCooperation. pic.twitter.com/DiX67MdQij