Arundhati Roy: #Me Too Urban Naxal 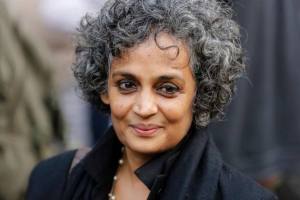 (on next day edit: this is a labor of love and loathing: love for arundhati roy, and loathing Hindu thug narendra modi.  if it’s not the same for you, please don’t bother reading it.  i was pleased that it least gleaned a few comments over yonder.)

This diary’s title is from Roy’srecent statement at a press conference is featured both scroll.in and outlookindia.com (both Aug. 30, although the former is an easier to read format).  The hashtag’s origin:
‘#MeTooUrbanNaxal Goes Viral, Here’s Why’:outlookindia, Aug. 30, 2018  [non-urban Naxals are Maoist Communists, often being accused of rural agri-terrorism..)

“The hashtag was created in response to a tweet by film maker Vivek Agnihotri, also an author of a book called Urban Naxals: The Making of Buddha in a Traffic Jam, who had tweeted: “I want some bright young people to make a list of all those who are defending #UrbanNaxals Let’s see where it leads. If you want to volunteer with commitment, pl DM me. @squintneon would you like to take the lead?” Agnihotri tweeted.”

These are portions of the full text of Roy’s statement to the press in Dehli.

When the Pune police conducted simultaneous raids at the homes of well-known activists, poets, lawyers and priests across the country, and arrested five people – high-profile civil rights defenders and two lawyers – on ludicrous charges, with little or no paperwork, the Government would have known that it was stirring up outrage. It would have already taken all our reactions into account, including this press conference and all the protests that have taken place across the country, before it made this move. So why has this happened?

Recent analyses of real voter data as well the Lokniti-CSDS-ABP Mood of the Nation survey have shown that the BJP and Prime Minister Narendra Modi are losing popularity at an alarming pace (for them). This means that we are entering dangerous times. There will be ruthless and continuous attempts to divert attention from the reasons for this loss of popularity, and to fracture the growing solidarity of the opposition. It will be a continuous circus from now to the elections – arrests, assassinations, lynchings, bomb attacks, false flag attacks, riots, pogroms. We have learned to connect the season of elections with the onset of all kinds of violence. Divide and Rule, yes. But add to that – Divert and Rule. From now until the elections, we will not know from when, and where and how the fireball will fall on us, and what the nature of that fireball will be. So, before I speak about the arrests of lawyers and activists, let me just reiterate a few points that we must not allow our attention to stray from, even while it rains fire, and strange events befall us.

It has been a year and nine months since November 8, 2016 when Prime Minister Modi appeared on TV and announced his policy of demonetisation of 80% of the currency in circulation. His own Cabinet seemed to have been taken by surprise. Now the Reserve Bank of India has announced that 99% of the currency was returned to the banking system. The Guardian in the UK reports today, that the policy has likely wiped 1% from the country’s GDP and cost approximately 1.5 million jobs. Meanwhile, just the printing of new currency has cost the country several thousand crores. After Demonetisation, came the Goods and Services Tax – a tax that is structured in ways that have dealt a further body blow to small and medium businesses that were already reeling under Demonetisation.” 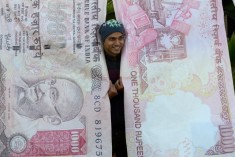 “While small businesses, traders and most of all the poor have suffered enormously, several corporations close to the BJP have multiplied their wealth several times over. Businessmen like Vijay Mallya and Nirav Modi have been permitted to decamp with thousands of crores of public money while the government looked away.

What kind of accountability can we expect for all of this? None? Zero?” [snip]

I’d followed some of the evolving/devolving news on this via my favorite tankie on Twitter, but I can’t remember the sources now.  Many of you will undoubtedly remember a lot of it, but here’s a cheat sheet on Modi’s Cashless Society from zerohedge.com from Nov. 2016, including the opening paragraphs:

Modi, speaking in his monthly address on national radio, said the government understands that millions have been affected by the ban on 500-rupee and 1000-rupees notes, but defended the action.

“I want to tell my small merchant brothers and sisters, this is the chance for you to enter the digital world,” Modi said speaking in Hindi, urging them to use mobile banking applications and credit-card swipe machines.

More than 90 percent of consumer purchases in India are transacted in cash, Credit Suisse estimates. While a smartphone boom and falling mobile data prices have led to a surge in digital payments in recent years, the base still remains low.

Modi urged technology-savvy young people to spare some time teaching others how to use digital payment platforms.”

Techno-Utopia for the Underclass, see?  Lessons from Bill Gates: “See this African woman farmer in her field with a SmartPhone?  She can now check weather forecasts and market conditions for her crop.”.

But this’ll fix the disinclusion of the rural poor, won’t it?

The launch of the #IndiaPostPaymentsBank is a watershed moment in the history of our banking sector. Using latest technology, this Bank will ensure even greater financial inclusion. pic.twitter.com/KfM0KnNtPH

Back to Roy who seems unsurprised that as it prepares for the 2019 elections, the BJP is the wealthiest party in India.  But oh, my: she writes that the recently introduced electoral bonds mean that contributions will be anonymous, thus all political parties’ wealth will be hidden.

IndiaCorpLaw parses electoral bonds at some length, perhaps even too even-handedly, imo.

“The investigation by the Karnataka police into the assassination of the journalist and activist Gauri Lankesh, has led several arrests which have in turn led to the unveiling of the activities of several right-wing Hindutva organisations like the Sanathan Sansthan. What has emerged is the existence of a shadowy, full-blown terror network, with hit-lists, hide-outs and safe-houses, flush with arms, ammunition and plans to bomb, kill, and poison people. How many of these groups do we know about? How many are continuing to work in secret? With the assurance that they have the blessings of the powerful, and possibly even the police, what plans do they have in store for us? What false-flag attacks? And what real ones? Where will they occur? Will it be in Kashmir? In Ayodhya? At the Kumbh Mela? How easily they could derail everything – everything – with some major, or even minor attacks that are amplified by pet media houses. To divert attention from this, the real threat, we have the hue and cry over the recent arrests.”

Arundhati is fiercely in favor of Kashmiri independence, and had earlier faced charges of sedition for saying so to the world.  For a primer, see ‘Modi and the Imperium: New Geopolitical BFFs’ toward the end of the diary, may the gods curse him and the lion he rode in on. 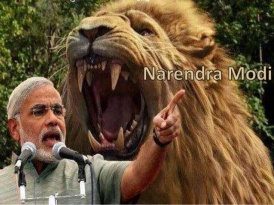 After writing of the horrific speed and corrupt ways in which educational institutions, including universities, are being dismantled, in favor of phantom schools and privatized Corporate Brahmanism, and the:

“Massive distress in the agricultural sector, increasing numbers of farmers’ suicides, the lynching of Muslims and the relentless attack on Dalits, the public floggings, the arrest of Chandrashekhar Azad, leader of the Bhim Army who dared to stand up to attacks by Upper castes. The attempt to dilute the Scheduled caste and Scheduled Tribes Atrocity Act.  [Dalits seem to be, or were, the untouchable class]

But here she gets the #UrbanNaxal territory:

“None of the five people who were arrested yesterday, Vernon Gonsalves, Arun Ferreira, Sudha Bharadwaj, Varavara Rao and Gautam Navlakha – were present at the Elgar Parishad rally that took place on December 31, 2017, or at the rally the following day when approximately 3,00,000 people, mostly Dalit, gathered to commemorate the 200th anniversary of the Bhima-Koregaon victory.) The Elgar Parishad was organised by two eminent retired judges, Justice Sawant and Justice Kolse Patel. The rally the following day was attacked by Hindutva fanatics, which led to days of unrest. The two main accused are Milind Ekbote and Sambhaji Bhide. Both are still at large. Following an FIR registered by one of their supporters, in June 2018 the Pune police arrested five activists, Rona Wilson, Sudhir Dhawle, Shoma Sen, Mahesh Raut and the lawyer Surendra Gadling. They are accused of plotting violence at the rally and also of plotting to kill the Prime Minister Narendra Modi. They remain in custody, charged under the draconian Unlawful Activities Prevention Act. Fortunately they are still alive, unlike Ishrat Jahan, Sohrabuddin and Kauser Bi, who, years ago, were accused of the same crime, but did not live to see a trial.”

“It has been important for governments, both the Congress-led UPA and the BJP to disguise their attacks on Adivasis, and now, in the case of the BJP, their attack on Dalits – as an attack on “Maoists” or “Naxals.” This is because, unlike in the case of Muslims who have been almost been erased from electoral arithmetic, all political parties do have an eye on those Adivasi and Dalit constituencies as potential vote banks. By arresting activists and calling them “Maoists’, the Government manages to undermine and insult Dalit aspiration by giving it another name—while at the same time appearing to be sensitive to “Dalit issues.” Today, as we speak, there are thousands of people in jail across the country, poor and disadvantaged people, fighting for their homes, for their lands, for their dignity—people accused of sedition and worse, languishing without trial in crowded prisons.”

“The home ministry is in receipt of a report from Maharashtra Police regarding certain communications amongst individuals having links to Maoists organisations containing references to targeting the prime minister, it said.
The purported letter allegedly mentioned of a plan to “assassinate  Modi in “another Rajiv Gandhi-type incident”, the police had told the court.”., etc, wash, rinse, repeat; sound familiar?

Extras: ‘This Is Absolutely Chilling’: Ram Guha, Arundhati Roy And Others React To Activists’ Arrests, A number of prominent youth leaders, activists and authors issued a joint statement, alleging it was an attempt by the BJP to engage in “scaremongering” and “polarise” the 2019 elections in its favour’, Aug. 29, outlookindia.com

“They Would Have Arrested Gandhi”: Ramachandra Guha On Raids On Activists

Also by Arundhati Roy: ‘I Don’t Believe There Are Only Two Genders. I See Gender As A Spectrum And I’m…’ [somewhere on that spectrum] Aug. 25, 2015, outlookidnia.com

Like Loading...
This entry was posted in resistance under oppression, security state fascism and tagged arundhati roy #Me Too Urban Naxal. Bookmark the permalink.

5 responses to “Arundhati Roy: #Me Too Urban Naxal”