Whoa; who among us could possibly fail to be enticed by that title from Eric London at wsws.org, 8 May 2019? 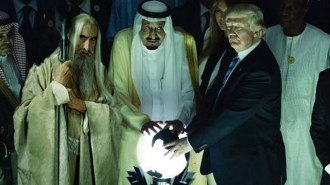 “On Sunday, Donald Trump re-tweeted a post by the arch-reactionary evangelical preacher and prominent Trump confidant Jerry Falwell, Jr. calling for the president to extend his term from the constitutionally mandated four years to six.

Referring to the Democratic Party-led effort to label Trump a Russian collaborator, the tweet read: “Trump should have 2 yrs added to his 1st term as pay back for time stolen by this corrupt failed coup.”

I dug Fallwell’s tweet up, and it’s true. (I’d begun on the Real Donald Trump‘s account, and was pleased to read that he’s given the Presidential Medal of Freedom to…Tiger Woods.  He’s also retweeted that his approval ratings are at 51%, and small wonder these from Judicial Watch, one (end of March) and the second (end of April).

“Trump’s Republican backers claim that Trump was only joking. But canceling elections is not something about which presidents joke. The president is the most powerful person in the world and his every word is closely followed in the US and internationally. Politicians, businessmen and decision makers around the world parse even seemingly mundane statements or off-the-cuff remarks for their deeper significance.

Trump’s re-tweet of a prominent, politically active evangelical preacher is not a joke. It is a signal sent deliberately to both supporters and opponents, who will understand that Trump is serious and that he is prepared to pursue anticonstitutional methods to stay in power. It is part of an increasingly dictatorial pattern that Trump and his fascist advisers have long planned.”

He buttresses his take that Boss Trumpeter’s serious about it by way of Trump quotes and similar authoritarian policies and fascistic leanings (my term, not his).  But this is where I’ve really been intending to head:

“In an article titled “Pelosi Warns Democrats: Stay in the Center or Trump May Contest Election Results,” the New York Times published an interview with Democratic Speaker of the House Nancy Pelosi, citing her “concern that Mr. Trump would not give up power voluntarily if he lost re-election by a slim margin next year.”

Here’s the piece from four days ago at the Times; I can’t get in even in Private Mode.

“In the interview, which was conducted before Trump’s tweet, Pelosi said in reference to the 2018 midterm elections: “If we win by four seats, by a thousand votes each, he’s not going to respect the election. He would poison the public mind. He would challenge each of the races; he would say you can’t seat these people. We had to win. Imagine if we hadn’t won—oh, don’t even imagine. So, as we go forward, we have to have the same approach.”

In response to brazen threats to violate the constitution, the Democrats’ strategy is to “own the center-left, own the mainstream,” Pelosi told the Times. Instead of condemning Trump’s proposal to extend his term or warning him of the serious criminal implications of canceling a presidential election, Pelosi instructs Democrats to “not engage in some of the other exuberances in our party,” making clear that the party will not allow any social reform.” [snip] 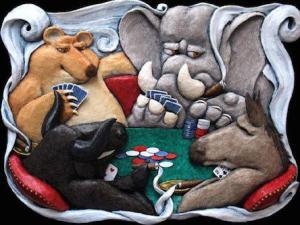 “Pelosi’s interview exposes the anti-Russia campaign as disingenuous and absurd. If Trump were colluding with Russia, wouldn’t his threat to refuse to accept election results be proof that Vladimir Putin is “undermining our democracy?” And doesn’t Trump’s threat alone constitute a violation of his oath to “protect and defend” Article II of the Constitution—an impeachable act?

The Democrats are combining absolute indifference to critical issues of democratic rights with support for major aspects of Trump’s policy agenda. On Monday, the New York Times published an editorial board statement titled, “Give Trump his Border Money.” The Democrats are collaborating with Trump on a new infrastructure program and lending support to his efforts to overthrow the government of Venezuela and impose tariffs on China.” [snip]

“A serious warning must be made. Trump’s tweet and Pelosi’s interview only scratch the surface of the antidemocratic and dictatorial measures being discussed behind closed doors at the White House, the Pentagon, Langley and Fort Meade.”

This entry was posted in electoral politics. Bookmark the permalink.