how much longer can Julian even survive?

“With his supporters rallying outside the court building, Julian Assange showed signs of fatigue in a bid to delay extradition proceedings scheduled for next year. The London court ruled against him.
Cleanly shaven and dressed in a navy suit, Assange appeared before Westminster Magistrates Court on Monday to seek the postponement of an extradition hearing scheduled for February.

His lawyer argued that the US government had attempted to kidnap and cause harm to his client, and that he would need more time to compile evidence for the case.

Although Assange raised his fist to supporters in the public gallery, the imprisoned journalist did not appear to be in good form. The WikiLeaks founder reportedly struggled to say his own name and date of birth, and held back tears as he told the court that he couldn’t “think properly.”

The court ultimately rejected the proposed delay. Outside the building, protesters chanted slogans and held up a giant banner reading “Don’t extradite Assange.”

In a video published by Ruptly, activists can be seen trying to surround a police van believed to be carrying Assange. Officers at the scene rushed to move protesters away from the vehicle.”  (I can’t find an embeddable version at Ruptly.)

On Oct. 19, 2019, Oscar Grenfell had reported at wsws.org that the push is on for the Australian government to defend Assange, and some MPs certainly are defending him, but this was the response by the head of the government:

“Prime Minister Scott Morrison responded this week by blandly declaring that Assange must “face the music” in the US. Senior government ministers have previously maligned Assange, repeating the lies concocted by the US intelligence agencies to discredit him.”

Laura Tiernen’s first-hand report of the delay today, Oct. 22, 2019, wsws.org is a horror story, and hard to read without committing Thought Crimes to the judge and every single person who has helped  in his persecution, and likely death.

“Standing in the dock—a room enclosed by reinforced glass panels—Assange mentally paused and appeared to stumble as Judge Vanessa Baraitser asked him to state his name and date of birth.

Baraitser’s vindictiveness towards Assange was clear from the first moments of the hour-and-a-half-long case management hearing. She told Assange’s supporters watching silently in the public gallery that “those causing a disturbance … will be asked to leave.” WikiLeaks’ editor and veteran journalist Kristinn Hrafnsson, investigative journalist John Pilger and former Lord Mayor of London Ken Livingstone were among those seated.” [snip w/ arguments by QC’s for both the US and for Assange]

“Summers requested that Baraitser grant a three-month delay to the extradition hearing scheduled for February 25. He pointed to “extraordinary” revelations of illegal US interference against Assange’s legal rights. Legal action taken by Assange against a Spanish security company had exposed the US “actively intruding on privileged discussions” between Assange and his lawyers at the Ecuadorian embassy.

The US state was involved in the illegal theft of information from telephones and computers, “hooded men breaking into offices” and “plans to kidnap and harm Mr Assange.”

“To be blunt, we need more time,” he told the court. The “enormity” of the issues in the case required “evidence gathering that would test most lawyers.”

Summers explained that a delay was also needed due to conditions facing Assange at Belmarsh Prison. His client had no access to information, no phone contact with his US legal team and mail restrictions meant he had only received court documents from his lawyers one week before today’s hearing.

Responding on behalf of the US government, Lewis told Baraitser, “You shouldn’t be beguiled into accepting” the three-month delay argued by Assange’s lawyers. “It’s just a guesstimate.”

Summers appealed to Baraitser that the February date for a full extradition hearing “isn’t sustainable.” He repeatedly stated that Assange’s right to a fair and equitable trial was being placed in jeopardy.

Baraitser was unmoved, stating: “My intention is to adopt the timetable suggested by Mr Lewis.” While granting to the defence a two-month extension to gather further evidence, she ruled the full extradition hearing would proceed on February 25.

In a final vindictive move, Baraitser declared that next year’s week-long extradition hearing would take place at Woolwich Magistrates Court near Belmarsh Prison. There were audible gasps in the public gallery at Baraitser’s announcement. The venue near Belmarsh has a “public gallery” of just three seats, all but denying public scrutiny and allowing a biased media to selectively report and spread disinformation and lies.” [snip]

“As the hearing drew to an end, Baraitser to turned to Assange and asked him to rise. “Do you understand what has happened here today?”

Assange, who has endured months of solitary confinement and been cut off from daily access to outside information, replied after a long pause: “Do I understand? Not really.”

“Is there anything else you would like to say?” Baraitser asked.

“I don’t understand how this is equitable.” Assange replied, speaking softly and inaudibly at times. “This superpower had 10 years to prepare for this case. I can’t remember anything. I can’t access any of my written work. It’s very difficult to do anything with such limited resources against a superpower intent on [inaudible]… They have an unfair advantage dealing with documents. They [know] the interior of my life with my psychologist. They steal my children’s DNA. This is not equitable what is happening here.” 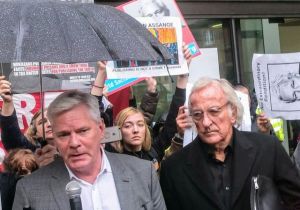 Kristinn Hrafnsson speaking alongside John Pilger after the hearing

“I can’t think properly,” he concluded, fighting back tears and raising both hands to his head. “The conditions of your detainment are not the subject of this court,” Baraitser replied. These were the final words spoken before Assange was led from the dock, out of view of his supporters in the public gallery.”

Tiernan then finishes with quotes by Kristinn Hrafnsson and John Pilger concerning the grotesque illegality of the entire political prosecution and persecution of Julian Assange.

Assange Case – I am trying to write a report of what I saw in Westminster Magistrate's Court today, but my hands keep shaking with rage, frustration and sadness to the point I can't type, and my heart keeps going into atrial fibrillation. I have got mysel https://t.co/n1g4wiA3dm

John Pilger outside Westminster court denounced the brutal treatment of Assange as the actions of a "rogue state"@SEP_Britain#DontExtraditeAssange pic.twitter.com/mhOnvu62NL

Protesting at the van taking Julian Assange away from court today. In solidarity as he goes back to Belmarsh prison.#freejulianassange @wikileaks pic.twitter.com/fACQPcAyZJ

Only Cowards And Sadists Support The Persecution Of Assange

"It is therefore also obvious that any journalist who fails to speak out against Assange’s persecution has no intention of ever publishing anything that the US government doesn’t want published."https://t.co/Aj4GHjEf3L

This entry was posted in WikiLeaks & other leaks. Bookmark the permalink.