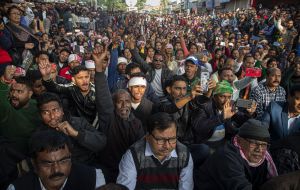 I’ve been thinking of analogies such as Kristallnacht, then after more days of protests and police actions: pogroms.  At this point, it’s become impossible for me not to write up, as grotesque as it is.  Will the DoJ and Congress sanction the hell out of him and his  government, and revoke Genocidaire Modi his American Visa as the GW Bush did?  And make it permanent?  Ah, but Obomba had let him in again with great fanfare and approbation, hadn’t he?  Because: the market of 3.8 billion people for Silicon Valley?  And DT loves him!  BFFs with virtually conjoined hearts!

“In the face of widespread popular opposition and warnings that India is rending its “secular” political-constitutional order, Prime Minister Narendra Modi and his Bharatiya Janata Party (BJP) government have rammed through legislation that effectively redefines Indian citizenship in Hindu supremacist terms.
Tabled in the lower house of India’s bicameral parliament only on Monday, the Citizenship (Amendment) Bill, 2019 or CAB was given presidential assent last night.

Passage of the CAB sets the stage for the BJP to proceed with its plans to draw up a National Register of Citizens (NRC), under which all of India’s more than 1.3 billion residents will have to prove, to the authorities’ satisfaction, that they are Indian citizens. Those unable to do so will be declared stateless and subject to detention and expulsion.

The NRC’s ostensible purpose is to identify “illegal immigrants.” In truth—and the CAB makes this manifestly evident—the aim of the NRC will be to harass, intimidate, and victimize India’s Muslim minority.

Adding insult to injury, the BJP is cynically trying to dress up the CAB, to use Modi’s words, as an act of “compassion and brotherhood.”

The CAB [now the CAA, Citizen Amendment Act] grants Indian citizenship to non-Muslims from Afghanistan, Bangladesh and Pakistan who entered India prior to 2015, on the grounds that Hindus, Sikhs, Jains, Buddhists, and Christians in those countries have been subject to religious persecution.

Conspicuously left off the list are members of minority Muslims groups, such as Pakistan’s Ahmadiyas or Afghanistan’s Shia Hazaras, who are victims of state discrimination and/or communal violence. Also, notably absent are the Rohingya, more than one million of whom had to flee Myanmar (Burma), which borders India to the east, in late 2016. Claiming the Rohingya are a “security threat,” the BJP government has held those that fled into India in detention camps and is deporting them to Myanmar.

When coupled with the CAB, the NRC’s essentially fascistic anti-Muslim purpose becomes clear.

“In according preferential treatment to non-Muslims from select neighbouring states, while setting up a process whereby only Muslims must establish their Indian citizenship, the BJP government has gone a long way to realizing the Hindu right’s longstanding goals of asserting Hindu dominance and making religion and not territoriality the criteria of citizenship.

The inclusion of Christians who migrated or fled to India from Pakistan, Bangladesh, and Afghanistan among those to be accorded citizenship under the CAB is a ruse. It is meant to camouflage the legislation’s Hindu supremacist motivation, no doubt with an eye to currying favor with the White House and the US Christian right.”

“On Friday and again on Sunday, the thousands who took to the streets of Delhi to protest against the CAA were set upon by police with lathis (batons) and tear gas. Violence erupted in south Delhi yesterday, when police blocked demonstrators’ path. Police subsequently invaded the campus of Jamia Millia Islamia University (JMI), without permission, and, according to University Chief Proctor Waseem Ahmed Khan, beat up students and staff members. More than fifty protesters had to be treated, some for severe injuries, at a nearby hospital.

Delhi authorities have ordered all schools in southeast Delhi closed today. Earlier, in an attempt to defuse the situation and no doubt to curry favour with the government, the JMI administration had postponed end-of-term exams and ordered the university closed until early January.

Police also invaded the campus of Aligarh Muslim University in Aligarh, Utter Pradesh, Sunday evening after using tear gas, water cannon and rubber bullets to disperse protesters. At least sixty students were injured. Early Friday, in response to an announcement from the Aligarh Muslim University student union that it would hold an anti-CAA protest, district authorities had shut down internet service and placed Aligarh under Section 144 of the Criminal Code, thereby criminalizing any gathering of more than four people.

There have also been large protests in Gaya and Patna, the two largest cities in the eastern Indian state of Bihar. The JD (U), which leads the Bihar state government and is a close ally of the BJP, supported passage of the CAA. But in the face of a public outcry, it is now claiming to oppose extending the NRC to Bihar.

In West Bengal, which has a large Muslim minority, there have been violent protests, expressing popular outrage over the latest BJP provocation. On Saturday, protesters blocked motorways and attacked several trains and train stations. The authorities have suspended internet services in parts or all of five districts: Howrah, which lies on the outskirts of Kolkata, Malda, Murshidabad, North 24 Parganas, and parts of South 24 Parganas.” [snip]

“The Indian bourgeoisie rallied behind the BJP after the Indian economy faltered at the beginning of the decade, making the BJP under Modi its premier national party, with a share of power in a majority of states as well as control of the national government and presidency. Whilst some sections now wring their hands over the BJP’s implementation of its longstanding Hindutva program, fearing Modi may soon reap a whirlwind, big business still clings to the Hindu “strongman,” calculating that he is the best bet to assert its predatory interests on the world stage and push through social incendiary pro-investor “reforms.”

From Arundhati Roy on Dec. 19: “Three years ago we stood in line obediently outside banks as demonetization was imposed on us, a policy that broke the back of our country’s economy. Now the National Register of Citizens coupled with the Citizenship Amendment Bill is set to break the back of our Constitution and cut the ground from under our feet,” the Booker Prize winning author said in a statement issued through Haymarket Books.

“Are we going to stand in line once again, obediently, and comply with this policy that eerily resembles the 1935 Nuremberg Laws of the Third Reich? If we do, India will cease to exist. We are faced with the biggest challenge since Independence. Stand up. Please. Stand up,” she added.”

And at a protest:

‘India’s Government is Going to War Against Its Own People’, Vijay Prashad, Dec. 20, 2019, counterpunch.org

“On December 13, the United Nations high commissioner for human rights released a powerful statement that criticized India’s new citizenship law. This “fundamentally discriminatory” Citizenship (Amendment) Act of 2019 would expedite citizenship for persecuted religious minorities from India’s neighboring countries. But in the list of those minorities, it names only Hindus, Sikhs, Buddhists, Jains, Parsis, and Christians. It does not name Muslims, despite the fact that there have been several important cases of Muslims being persecuted in Pakistan (the Ahmadis), in Afghanistan (the Hazaras), and in Myanmar (the Rohingyas). The UN said that not only does this law violate India’s obligations to conventions, treaties, and compacts that it has signed at the global level, but also that it is in violation of its own Constitution.” [snip]

“The BJP government was particularly ruthless against protests at two major universities—Jamia Millia Islamia (New Delhi) and Aligarh Muslim University (Aligarh), both historically Muslim universities. The police have been extraordinarily violent against student protests in the past several months, but this was at another level. At Jamia, the police beat unarmed students, chased them into their dormitories and continued to beat them, and fired tear gas into the library. There is video evidence of policemen burning buses, assaulting journalists, and creating the conditions of a full-scale police-driven riot; in Aligarh, there is video evidence of the police breaking student motorcycles.” [snip]

“As if on cue, the BJP government hastily shut down internet access in India’s northeast, and in parts of the country where the protests have been most virulent. Last year, India led all other countries in internet shutdowns. Overall, 67 percent of all shutdowns of the internet took place in India; this year, already, 63 percent of all shutdowns have been in India. Internet in Jammu and Kashmir has now been off for 136 days (between August 4 and December 17); there is no sign that it will be restored. Indeed, the suffocation of Jammu and Kashmir continues unabated. The Kashmir Chamber of Commerce says that Kashmiri businesses have lost over $1.4 billion in this period.”

Prashad then writes of the IMF’s chief economist having visited Inia this week, saying she was shocked, I tell you…shocked…that Modi’s economy was tanking, and the IMF is urging ‘structural austerity reforms’ which he notes actually means: fuck the workers, erase any remaining restraints on business, please the Investor Class.

“Farmer, peasant, and trade union organizations have been consistently on the march against the government’s various economic policies. In the past five months, the price of onions—a good indicator of food inflation—spiked by 253 percent. Rather than fix the endemic internal problems in the domestic onion market, a demand of the farmer and peasant organizations, the BJP government has loosened rules for the import of onions, a demand of the big traders. BJP policy is not made to benefit the working class and peasantry. It is made on behalf of the big businesses. It is almost as if the BJP-IMF slogan is “Save the Billionaires,” or “Billionaires Bachao,” as Srujana Bodapati, the coordinator of the Delhi office of Tricontinental: Institute for Social Research, writes. Little wonder that the farmer, peasant, and trade union federations have announced a major general strike for January 8, 2020. It is expected that hundreds of millions of workers and peasants will be on the streets on that day. Their charter of demands is a direct assault on the BJP-IMF austerity policies.”

You know it’s a criminal horror show when Amnesty International and the Guardian cover the massive protests.

And from the Twittersphere; seems  as though plenty of them reckon Modi = Hitler:

If anyone doubted whether the BJP government was capable of genocide, the reports coming from UP should put that to rest. Cops entered houses of Muslims who weren’t even protesting to attack and ransack. The UP police is a communal militia at the moment. #IndiaAgainstCAA_NRC

At mammoth protest against CAA in Hyderabad, @asadowaisi says it’s a fight to save India. (Posting again as there was an issue with previous link). #CAA_NRC_Protest https://t.co/0Kqj5UjQCE

Gujarat 2002 is happening in UP right now. Modi was CM then, now he is PM!#CAA_NRC_Protest #IndiaHatesModi

This entry was posted in indigenous global activism and tagged f*ck fascist Modi!. Bookmark the permalink.