an update on Julian Assange & his new family 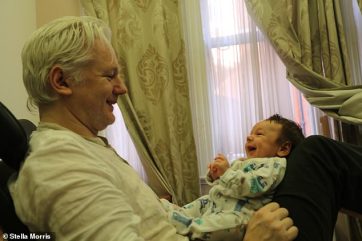 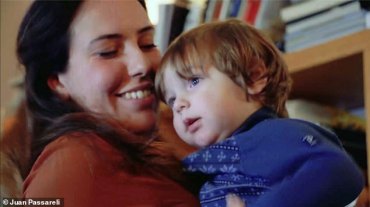 From Oscar Grenfell, 13 April 2020, wsws.org: ‘Julian Assange’s partner Stella Morris speaks out: “His life is on the brink”

Julian Assange’s fiancée (and children) talks to camera for the first time on the one year anniversary of his imprisonment.

Grenfell describes some of what Morris had said in the video I’ve embedded above, but my guess is that you’ll want to listen yourselves a it’s under 12 mins.

“In accompanying comments to the Daily Mail, the South-African born lawyer explained that she was speaking out publicly for the first time, because Assange’s “life is on the brink.” She warned that “Julian’s poor physical health puts him at serious risk, like many other vulnerable people, and I don’t believe he will survive infection with coronavirus.”

“Over the past five years I have discovered that love makes the most intolerable circumstances seem bearable but this is different, I am now terrified I will not see him alive again,” she said.

Morris had filed a statement in support of an application last month for Assange to be released on bail.

It was callously rejected by Judge Vanessa Baraitser, despite the fact that the WikiLeaks founder has not been convicted of a crime and suffers from a raft of health issues, including a chronic lung condition. This means that the COVID-19 pandemic poses an imminent threat to his life.

Currently, 150 Belmarsh Prison staff are now infected with the virus or self-isolating. There are two known deaths of inmates, but Assange told a friend last week that there had been other fatalities.” [snip]

“In a particularly vindictive move, Baraitser rejected an application from Assange’s lawyers for the identity of Morris and her children to be protected. They had warned that Morris had already been harassed because of her relationship with Assange. The calls by senior US politicians and intelligence officials for Assange to be silenced, or even killed, clearly place her in danger.

Baraitser was unmoved, declaring that it was in the “public interest” to expose the identities of Assange’s vulnerable family members.”

He further narrates the above video, then:

“The rights of the two boys, moreover, have already been trampled upon by governments and the intelligence agencies. Morris confirmed that employees of UC Global, a Spanish company employed by the Ecuadorian government to provide security at the London embassy, had plotted to steal one of Gabriel’s nappies, to test his DNA.

At the time, UC Global is alleged to have been secretly working in collaboration with the US Central Intelligence Agency to spy on Assange. Morris told the Daily Mail: “I knew there was spying but this felt ruthless, as if there were no boundaries. It wasn’t just an invasion of Gabriel’s privacy, it made me think he wasn’t safe.”

Assange first met the younger child, Max, in Belmarsh Prison last year. He had been unable to see the baby while he was still in the Ecuadorian embassy, because of the repressive conditions placed on him by that country’s new administration in early 2018 as it prepared to renege on the WikiLeaks founder’s political asylum and hand him over to his persecutors.” [snip]

“Morris’s comments underscore the brutality of the protracted pursuit of Assange. They demonstrate the immense stakes in the defence of the WikiLeaks founder, for the democratic rights of the working class, but also for his young family. Her intervention is a powerful refutation of the incessant attacks on Assange, which have been aimed at dehumanising him and legitimising the abrogation of his rights.

The video has won a warm response from tens of thousands around the world.”

The rest concerns salacious tabloid gossip and a disgusting Tweet by a Guardian scandal-monger; I won’t dignify her comment by bringing it.

“Julian Assange has revealed to a friend the harrowing details of his life in Belmarsh. WikiLeaks founder is still confined at the UK maximum security prison, despite it being stricken with the novel coronavirus.

Covid-19 has spread around Belmarsh to such an extent that the prison is “barely functioning” any more at all, British freelance video journalist Vaughan Smith has revealed in a Facebook post, after talking with Assange by phone.

As many as 150 prison staff members have been forced into self-isolation as they might have contracted the coronavirus, Smith said. The prison admitted in mid-March that the disease already reached it premises and even reported one coronavirus-linked inmate death.

Assange told Smith that the real death toll might well be higher, since “the virus is ripping through the prison.”

The WikiLeaks founder has to spend almost 24 hours alone in his cell as the prison apparently strives to limit any contact to stem the spread of the disease. Yet Assange and other inmates still spend the half an hour of exercise they are still allowed in a yard crowded with others, according to his friend.”

Like Loading...
This entry was posted in WikiLeaks & other leaks and tagged assnage's new family revealed. Bookmark the permalink.