In Kenya during Al-Shabaab standoff

Another giant  global humanist has left us this week, may he rest in power, and he and his works be remembered forever.  Allow me to borrow excerpts from several homages by those who knew him and his work, and loved him well.

EDITOR’S NOTE: CounterPunch received word from Rossi Indira, Andre’s partner who was with him at the time of his death, that Andre died from complications with diabetes. Andre had been very ill for several weeks prior to his death, he could barely walk and one of his legs was paralyzed. Rossi tells us that he also refused medical treatment. Andre’s funeral is being held in Istanbul. For a full list of articles he wrote for CounterPunch, please visit his author page.

Exposing Lies of the Empire (PT. Badak Merah Semesta, 2015) first introduced me to André Vltchek’s remarkable journalism, weaving together unforgettable narratives of Western imperialism and capitalistic fundamentalism. He’s widely considered one of the world’s most gifted thinkers, and even though I did not personally know him, I always looked forward to reading his articles. His words came from direct personal experience on the front lines of battlefields or wherever humanity suffered and struggled. He knew slums as well as palaces and villages that had been bombed into the ground. He was a true revolutionary fighting for the underclass, a lifetime communist and advocate of Chinese globalism, which he described as beneficial to former colonized countries throughout the world.

A philosopher, a filmmaker, an exceptional investigative journalist, he’ll be missed by millions of the unnamed that he fought for justice and redemption from forces of colonialism, past and present.

He died unexpectedly in the middle of the night September 22 when traveling in a chauffeur-driven car with his wife from Samsun on the Black Sea in Turkey to Istanbul. When they arrived in early morning hours at a hotel, his wife tried to awaken him, but he had passed. Turkish police have ordered a forensic analysis of his mysterious unexpected death.” […]

“In East Timor where he was filming in 1996, the Indonesian military arrested him and hung him from the ceiling and tortured him for 24 hours. Thereafter, he could not use his left arm for one year. He was reporting on the U.S. backed Indonesian coup of 1965 in a film called the “Downfall,” produced and directed by André. It took him 15 years to complete the film during which time he was condemned to death twice. He’s likely one of the only journalist in the world whose body is filled with battle scars via torture and/or direct closeness to battle zones.”

“André, my good friend and comrade, is no more.

In the night from Monday to Tuesday 22 September, André traveled by chauffeur-driven car with his wife from Samsun on the Black Sea in Turkey to Istanbul. When they arrived in the early morning hours at the hotel and his wife wanted to wake him up, he didn’t react. He had passed away.

Turkish police said André’s death was “suspicious”. His body was immediately brought to a hospital for forensic analysis.

André traveled relentlessly from one battle field to another, from one conflict zone to a war zone. He exposed innumerable atrocities committed around the world, mostly by western powers. He never wavered from revealing the truth. From Afghanistan to Syria, Iraq, Iran, Sudan to Argentina, Chile, Peru to Hong Kong, to Xinjiang, the Uygur Autonomous Region of the People’s Republic of China – André was there. He reported on environmental crimes in Borneo, or originally called Kalimantan, Indonesia, where corruption is destroying vital rain forests – the lungs of Mother Earth – for the benefit of western corporations, killing wildlife and annihilating the livelihoods of indigenous people. Here is a video interview (20 min.) of André’s by DotDotNews, China, of 2 May 2020, depicting a broader picture of André’s engagements around the world.”

‘If the world is upside down the way it is now, wouldn’t we have to turn it over to get it to stand up straight?’
— Eduardo Galeano, Upside Down, 1998

“Let him sleep in peace, but let his words ring out, his passionate cries for justice and peace in a world of violent predators.”

He then quotes from the ending of André’s 9/12/2020 quite lengthy ‘Now West Should Sit On Its Backside, Shut Up, And Listen To “The Others”!’

‘But notice one thing: it is them, telling us, again, telling the world what it is and what it is not! You would never hear such statements in Africa, the Middle East, or Asia. There, people know perfectly well what it really is all about, whether it is about race or not!

I have just spent two weeks in the United States, analyzing the profound crises of U.S. society. I visited Washington, D.C., Minneapolis, New York, and Boston. I spoke to many people in all those places. What I witnessed was confusion and total ignorance about the rest of the world. The United States, a country which has been brutalizing our Planet for decades, is absolutely unable to see itself in the context of the entire world. People, including those from the media, are outrageously ignorant and provincial.

And they are selfish.

I asked many times: “Do black lives matter all over the world? Do they matter in the Democratic Republic of Congo, and do they matter in West Papua?” I swear, I received no coherent answer.

A few years ago, I was invited to Southern California to show my documentary work from Africa (my feature documentary film Rwanda Gambit, [5 min. trailer, US-Western-supported Paul Kagame, genocidaire] about West-triggered genocides in both Rwanda and later in the Democratic Republic of Congo), where millions of black people are dying, in order for the vast majority of the U.S. whites to live in piggish opulence.

But before I was allowed to present, I was warned: ‘Remember, people here are sensitive. Do not show too much of brutal reality, as it could disturb them.’

Hearing that, I almost left the event. Only my respect for the organizer made me stay. 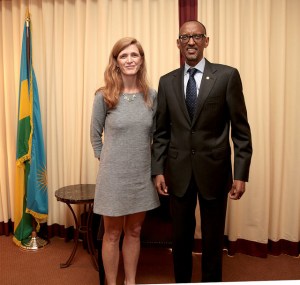 “Poetry, music, great literature, these he loved as he fought on the barricades for peace.

I urge you to read his article, Love, Western  Nihilism and Revolutionary Optimism

He was a rare and courageous man.  Let us ring bells in his honor.

Here’s a Kenneth Rexroth poem for Andre, the fighter with the poet’s heart:

The trees hang silent
In the heat….
Undo your heart
Tell me your thoughts
What you were
And what you are….
Like the bells no one
Has ever rung…

And his website ‘Vltchek’s World in Words and Images ‘, with tab for books, films, world travel blog, and images from A-Z nations, as well as ‘in a good company w/ In a good company” with Galeano, Cobb, Djokopekik, Roy, Chomsky, Parenti, Steppling 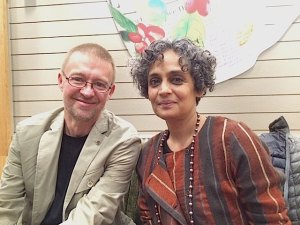 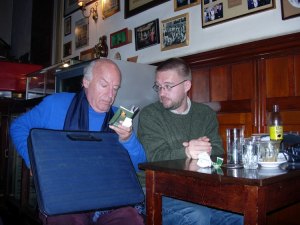 Like Loading...
This entry was posted in empire and war crimes and tagged RIP andré vltchek. Bookmark the permalink.