Two items for your consideration (and while I know this diary is quite a tome, I believe both are key issues):  First, Trump Unplugged

“A fierce debate about the role of journalism has emerged on the internet, after multiple media outlets cut away from a live address in which US President Donald Trump leveled allegations of voter fraud.

In an unprecedented move, MSNBC, NBC News, CNBC, CBS News, ABC News, and even publicly funded NPR(Radio), cut their feed(s) from the White House as Trump began to speak about alleged voting irregularities during the 2020 contest. Among the major broadcasters, only Fox and CNN chose to air the full speech. A CNN chyron shown during his speech read: “Without any evidence, Trump says he’s being cheated.”

During his Thursday night address, Trump pointed at alleged “election interference from Big Media, Big Money and Big Tech,” and claimed that “we were winning in all the key locations by a lot” and that only later “our numbers started miraculously getting whittled away in secret.”

Outlets defended pulling the plug on Trump’s provocative remarks, arguing that they didn’t want to spread unsubstantiated claims about the election.

‘President Trump just spoke at the White House, as key states continue to count votes. Shep has the facts: “What the President of the United States is saying, in large part, is absolutely untrue.”

“One news outlet, USA Today, not only cut Trump off but then also removed video of Trump’s remarks from all of their platforms–an extraordinary effort to censor the President of the United States more common in communist China.

Nicole Carroll, Editor in Chief of USA Today said, “President Trump, without evidence, claimed the presidential election was corrupt and fraudulent. @USATODAY stopped the livestream of his remarks early and has removed the video from all of our platforms. Our job is to spread truth — not unfounded conspiracies.”

‘US networks pull the plug on Trump’s live address due to ‘lies’; Several TV networks halted live coverage of Donald Trump’s address over concerns the US president was spreading disinformation, Nov. 6, 2020, aljazeera.com

These Tweets from @oliverdarcy (Senior media reporter at CNN) come with videos:

“On Fox News, anchors @BretBaier and @marthamaccallum pretty much repeat all of Trump’s baseless charges uncritically after his statement undermining the integrity of the US election.”

“What a sad night for the United States of America to hear their President say that,” @jaketapper says on CNN. “To falsely accuse people of trying to steal the election, to try to attack democracy that way with his feast of falsehoods. Lie after lie after lie.”

A few pithy rejoinders from @ajamubaraka on  Nov 8

“Folks, how does the privately owned capitalist press determine who is the “president elect”? Answer: the same way they will determine the president of Venezuela or any other nation where they are attempting to execute the agenda of the dominate wing of the capitalist oligarchy.

The blatant eradication of the theoretical lines between partisan editorializing & news reporting reveals the ideological role of capitalist press. That reality & the political censorship by democrat aligned tech companies is producing a nightmarish totalitarian dystopia.

“Folks is this supposed to be journalism? From the Clinton News Network (CNN) “Trump has not appeared in public after his grievance- and lie-filled news conference at the White House on Thursday.” This may be true but shouldn’t the public be the one to characterize his comments?

The real left is in more danger under the hegemony of the neoliberal totalitarians. Look at the level of censorship that has now become normalized. Big tech in alliance with democrat party are now the primary threats to liberal values like free speech & access to information.

Liberals & the left are drawing the wrong conclusions from the Trump vote. Also, people are talking about how the private media decides what information will be allowed to be disseminated, including the President of the U.S., no matter the content of his speeches.”

“I actually believe that liberals are more dangerously pathological than some of the Trump forces. Liberals are angrily suggesting that Trump & his supporters should surrender & accept defeat for the good of the country. You know, like how they did in 2016.”

Next: Trump Canceled.  Earlier I’d referred to it as Neo-McCarthyism, but one of my favorite socialists on Twitter called it: ‘Woke McCarthyism’.  Sadly, much of it’s also by way of Tweet, nigh on to impossible to cross-post, so I’ll offer the facsimiles with Tweet dates for you to check out.

“Democrats and conservative critics of President Donald Trump have begun creating ‘blacklists’ of his staff and supporters, apparently hoping to shun them from polite society as divisions grow wider amid a contentious election.

As ballots continue to be tallied across several battleground states three days after Americans hit the polls to select their next president, knives are coming out among some of Trump’s detractors. A new initiative dubbed the “Trump Accountability Project” is compiling names of administration officials and the president’s high-profile supporters and donors, insisting “we must never forget those who helped further the Trump agenda.”

While the project doesn’t say how it will use its blacklist to ensure “accountability,” the registry has already swelled to hundreds of names, including dozens of sitting judges, and continues to grow as others in the anti-Trump orbit come around to the idea. The list was publicly viewable for a brief time, but was locked by its creators on Friday evening without explanation, evidently defeating its purpose altogether.

Among the project’s supporters is Democratic Rep. Alexandria Ocasio-Cortez (New York), who called to document the “tweets, writings [and] photos” of “Trump sycophants” so that they can’t “deny their complicity” with the current administration.

The congresswoman soon prompted a response from Obama administration alum Michael Simon, a member of the Accountability Project team, who vowed to compile the names of “every administration staffer, campaign staffer, bundler, lawyer who represented them – everyone.”

He deleted it but the internet is forever pic.twitter.com/kUL3B4aauR

‘AOC wants to cancel those who worked for Trump. Good luck with that, they say’; Memories are short in “This Town.” Just look at the veterans of George W. Bush’s White House, who did just fine for themselves. Nov. 9, 2020, politico.com

“At first I brushed it off as ridiculous, but what is scary is that she’s serious,” said a White House official of AOC’s tweet. “That is terrifying that a sitting member of Congress is calling for something like that. I believe there is a life after this in politics for Trump officials, but the idea that a sitting member of Congress wants to purge from society and ostracize us should scare the American people. It definitely should scare the American people more than it scares me. That type of rhetoric is terrifying when you have 70 million Americans who voted for this president. It might start with Trump officials but what if they go further?”  […]

““The Bush people faced this,” said one of the president’s closest advisers. “Bush left office very unpopular, people thought thousands of people died in an unnecessary war and he was responsible for it. Everybody forgets that now that he’s an artist who doesn’t do partisan politics.”

This person pointed to the wealth accumulated by the two main architects of the war since Bush left office. “Don Rumsfeld did very well for himself when he left government,” said the close Trump adviser, who already has an unannounced book deal in hand. “Dick Cheney? I’ve been to his house in Wyoming!”

So has Harry Whittington, smile)

As far as AOC’s ‘Is anyone archiving these Trump sycophants for when they try to downplay or deny their complicity in the future? I foresee decent probability of many deleted Tweets, writings, photos in the future’…it’s an exercise in ludricous self-parody, given that a few of her constituent detractors on Twitter seem to have downloaded the Wayback Machine application, and have archived some of her most embarrassing scrubbed past Tweets.

In terms of ‘sycophants who were complicit with Trump’, she was a signatory to a missive (along with other ‘progressives’ and the rest of The Squad) to Sec. Thug Pompeo criminalizing the Maduro Regime, but requesting No Military Invasion, No Further Sanctions…lest everyday citizens in VZ be adversely affected.  #HowCoy

But this may Take the Cake, lol:

“Although we never got past the reception desk, we were permitted to present a petition [some of you may have signed it as well] signed by leading academics and anti-imperialist organizers on behalf of the people of Bolivia. We provided all personal data and contact info requested by the office. We were promised that we would be contacted promptly to discuss scheduling a meeting.” […]

“By contrast, a group of imperialist sympathizers who had been promoting the coup for months were granted instant access. On November 16, four days after the military coup that destroyed Bolivian democracy, Ocasio-Cortez met with a group of pro-Áñez, pro-Camacho activists led by one Ana Carola Traverso. Traverso’s connections to the Bolivian coup plotters have been extensively documented online.” […]

“Rep. Ocasio-Cortez symbolically embraced the coup by posing for a photo with this group as they brandished the tricolor Bolivian flag, which during that period had become a signal of support for the golpistas (as opposed to the Wiphala flag, which symbolized popular resistance to the takeover). She told them that she supports their “democratic grassroots movement” and offered them “direct lines of communication.”

Jacob Levich is a university administrator who has lived in New York’s 14th Congressional District for more than 20 years.

Note: Levich said that Counterpunch had later deleted this photo: 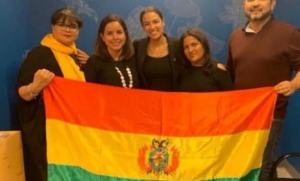 She’s been the subject of two graphic novels as the Heroine, on the cover of the Rolling Stone, one film, but lest anyone get that she’s not planning to run for President in 2024, she was the cover story of Vanity Fair.  All the money in the world couldn’t buy this Puff Piece homage to…AOC.  Does it rise to the level of Camp? Depends on the eye of the beholder, I’d imagine.  (smile) 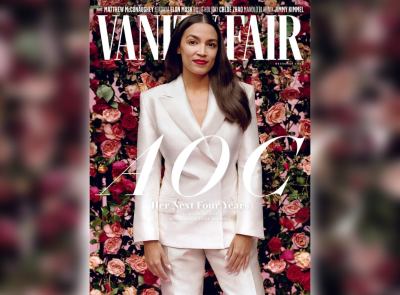 ‘AOC’s Next Four Years; The history-making congresswoman addresses her biggest critics, the challenges that loom no matter who wins, and what she’s taking on next, vanity fair, Dec. 2020

This entry was posted in electoral politics, geopolitical matters, realpolitik,. Bookmark the permalink.