Senate confirms drone-memo author David Barron to appeals court; Obomba can kill at will, you betcha 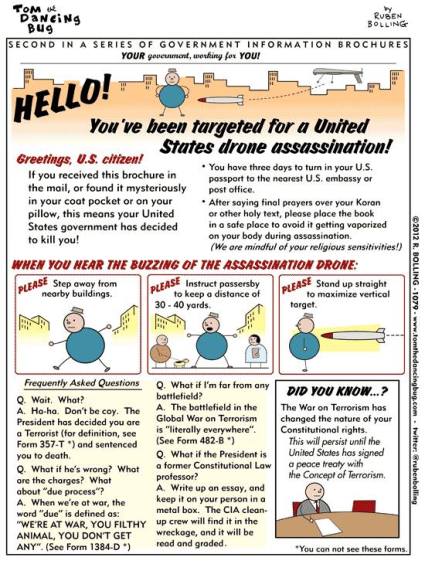 From the LA Times:
“Former Justice Department lawyer David Barron won confirmation to the U.S. 1st Circuit Court of Appeals on Thursday, despite concerns raised about his role in justifying the killing of American citizens abroad suspected of terrorist activities.
The Senate voted, 53 to 45, to give final approval to Barron. A day earlier, the chamber voted to end debate on his nomination despite a last-ditch effort by Sen. Rand Paul (R-Ky.) to block him.

Barron wrote at least one memo that provided the legal justification for the targeted killing of Anwar Awlaki, a U.S. citizen who was slain by a drone strike in Yemen in 2011. Senators from both parties had pressed for access to the document as a precondition for even considering Barron’s confirmation.
On the eve of Wednesday’s vote, the Justice Department announced that it would release the long-sought secret document. Previously the Obama administration had offered only to show unredacted copies privately to senators.
The 1st Circuit Court of Appeals, based on Boston, hears cases from the New England area.”

“It turns out Mr. Obama and his White House shop really can give appropriate support to nominees if they care, which seemed to be a trait entirely lacking earlier in the Obama Presidency. And by giving the ill token legal cover to Mr. Obama for the extrajudicial execution of American citizens, that Obama had already attempted once without, Mr. Barron certainly earned the support of the Obama White House.

“What was unconscionable and traitorous to the rule of law and Constitution for Obama, and the Democratic majority in the Senate, under George Bush is now just jim dandy under Barack Obama. It is intellectual weakness and cowardice of the highest order.

So we come back to the case of David Barron. Frankly, it is not hard to make the argument that what Barron has done is actually worse than the travesties of John Yoo and Jay Bybee. As unthinkable, heinous and immoral as torture is, and it is certainly all that, it is a discrete violation of domestic and international law. It is definable crime.

But what David Barron did in, at a minimum, the Awlaki Targeted Kill Memo (there are at least six other memos impinging on and controlling this issue, at a minimum of which at least one more is known to be authored by Barron, and we don’t even deign to discuss those apparently), was to attack and debase the the very foundational concept of Due Process as portrayed in the Bill of Rights. Along with Habeas Corpus, Due Process is literally the foundation of American criminal justice fairness and freedom under our Constitution. [snip]

And there is absolutely nothing so far known in Mr. Barron’s handiwork to indicate it could not be adapted for use domestically if the President deems it so needed. Once untethered from the forbidden, once unthinkable Executive Branch powers always find new and easier uses. What were once vices all too easily become habits. This is exactly how the once proud Fourth Amendment has disappeared into a rabbit hole of “exceptions”.

“If the above were not distressing enough, the Barron nomination was supposed to, at a minimum, be used as leverage to get public release of the Barron handiwork legally sanctioning Mr. Obama to extrajudicially execute American citizens without a whiff of Due Process or judicial determination. Did we get that? Hell no, of course not. A scam was run by the Obama White House, and the Senate and oh so attentive DC press fell for it hook, line and sinker. We got squat and Barron is on the rocket path to confirmation with nothing to show for it, and no meaningful and intelligent review of his facially deficient record of Constitutional interpretation.”

“Speaking before the Senate Foreign Relations Committee, the administration officials—State Department Deputy Legal Adviser Mary McLeod and Defense Department General Counsel Stephen Preston—declared that the 2001 Authorization for the Use of Military Force (AUMF) was not required for any of the drone attacks, troop deployments and other war operations carried out by the Obama administration.

For more than a decade, the AUMF has been a catch-all justification for all the illegal and unconstitutional activities of the Bush and Obama administrations—military invasions, indefinite detention (including at Guantanamo Bay), torture and drone assassination. Congress is currently considering revising or ending the AUMF as part of an effort to shift these operations onto a more permanent foundation.

In the course of questioning from senators on the future of AUMF, McLeod and Preston indicated that, in the administration’s view, there are in fact no additional powers that the executive has as a result of the AUMF that it does not already have from Article II of the US Constitution—an assertion of unlimited executive power.

Preston testified, “I am not aware of any foreign terrorist group that presents a threat against this country that the president lacks authority to defend against simply because they are not covered by the AUMF. If the group presents a threat the president does have authority to take steps against that threat.”
When asked by Republican Senator Bob Corker whether the president could continue to “carry out the counter-terrorism activities he is carrying out today” if the AUMF were repealed, McLeod replied, “Yes, I believe he could.”

“The US has the authority to target individuals, including Americans, who pose an imminent threat to attack our country,” McLeod added (emphasis added).
In the language of administration lawyers, “imminent” has been redefined to render this condition meaningless. McLeod did not say whether the killing of Americans could take place within the United States.

Wednesday’s testimony is part of an internal debate within the political establishment over how to justify endless war. Testifying before the Senate Armed Services Committee almost exactly one year ago, Assistant Defense Secretary Michael Sheehan argued that the AUMF gives the administration virtually unlimited war powers anywhere in the world, including within the United States. He added that the war authorization would go on indefinitely, “at least 10 to 20 years.”

But hoo-boy; not only does the Prez boogie down with Ellen Degeneres, he actually steals from Aron Sorkin’s ‘the West Wig’, but WALKS ACROSS THE STREET!

From the White House email today:

‘The President was heading over to the nearby Department of the Interior and decided to break with tradition:  He walked over instead.On the way there, he got to chat with all sorts of people — from roadside vendors to tourists to locals. Needless to say, they weren’t expecting it.

We think you’ll get a kick out of it. Take a look — and then pass it on”

This entry was posted in drone assassinations, empire and war crimes. Bookmark the permalink.

5 responses to “Senate confirms drone-memo author David Barron to appeals court; Obomba can kill at will, you betcha”