Updates….while we wait a bit more…[updated at the end of comments w/ airstrikes news] 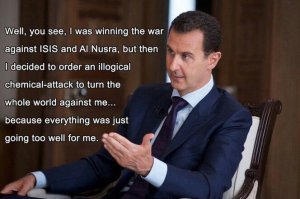 “Never said when an attack on Syria would take place. Could be very soon or not so soon at all! In any event, the United States, under my Administration, has done a great job of ridding the region of ISIS. Where is our “Thank you America?”

There was speculation that this was due to the fact that he’d Tweeted mocking Obama for tipping his hand ahead of some bombing run of his in the past; I’d seen the Tweet, but forgotten the date.

Theresa May won’t make the same mistake her predecessor David Cameron had made: she won’t ask Parliament to authorize joining a coalition to bomb Syria.

France’s President Emmanuel Macron says he has “proof” that the Syrian government attacked the town of Douma with chemical weapons last weekend, and that he’ll decide “in due course” whether to respond with air strikes.

Now we haven’t heard if inspectors from the OPCW have arrived in Douma yet, but given this ‘news’ of sorts, one might not be considered a tin-foil-hatter not to be cynical as to what they’ll find…given these stories in the news:

“The Organisation for the Prohibition of Chemical Weapons did not name the nerve agent as Novichok, but said it agreed with the UK’s findings on its identity. [<the report]

But Maria Zakharova, from the Russian Foreign Ministry, said the allegations in relation to the poisoning of Sergei and Yulia Skripal were a “clear anti-Russian campaign, the like of which we have not seen in the world for a long time in terms of its scale and lack of principles”.

She accused the British authorities of ignoring the “norms of international law, the principles and laws of diplomacy, the elementary rules of human ethics”.

And she claimed no one except for British authorities had seen the Skripals for more than a month.”

“Despite the British government’s claims of Russian ‘culpability’ for the poisoning, nowhere does the OPCW’s report assign blame for the incident or even identify the source of the agent.

The part of the report that has been released publicly does not even specifically name Novichok as being the substance used, although it says it does name the substance in the parts of the findings which remain classified.

The OPCW used their own samples gathered from the victims of the poisoning and contaminated environmental matter to put together its conclusions.

“The results of analysis by OPCW-designated laboratories of environmental and biomedical samples collected by the OPCW team confirm the findings of the United Kingdom relating to the identity of the toxic chemical that was used in Salisbury and severely injured three people“, the OPCW said.

The watchdog also found “the toxic chemical was of high purity” because of an “almost complete absence of impurities.”

UK Prime Minister Theresa May declared on March 12 that the Skripals had been poisoned with a military-grade nerve agent identified as A-234, also known as Novichok.

The OPCW will hold a special session on the incident next Wednesday.”

Well, sure, after being subjected to a nerve gas 10 times stronger than Sarin, the Skripals are both alive, and she’s in a secure location after leaving the hospital.  That kinda stretches credulity wafer -thin, doesn’t it?

But Boris Johnston till knows it was Putin.

I’ve tried, but failed, to discover who did the testing in the UK, what the results actually were, but given this new ‘report’, those are the only hits I’ve gotten.

But in any event, Theresa May ha called for another ‘emergency meeting’ of the UN Security Council to ‘discuss’ this official OPCW report that’s aid to….tally with hers.

As to ‘not seeing the Skipals in public for over a month, etc., b at MoA has added to that weirdness pretty darned well:

“On Sunday Yulia Skripal was secretly released from the Salisbury District Hospital but immediately taken into British government custody. She is under guard at an unknown location. Yesterday the Metropolitan Police released a Statement issued on behalf of Yulia Skripal:

“I have specially trained officers available to me, who are helping to take care of me and to explain the investigative processes that are being undertaken. I have access to friends and family, and I have been made aware of my specific contacts at the Russian Embassy who have kindly offered me their assistance in any way they can. At the moment I do not wish to avail myself of their services, but, if I change my mind I know how to contact them.

“Most importantly, I am safe and feeling better as time goes by, but I am not yet strong enough to give a full interview to the media, as I one day hope to do. Until that time, I want to stress that no one speaks for me, or for my father, but ourselves. I thank my cousin Viktoria for her concern for us, but ask that she does not visit me or try to contact me for the time being. Her opinions and assertions are not mine and they are not my father’s.

“For the moment I do not wish to speak to the press or the media, and ask for their understanding and patience whilst I try to come to terms with my current situation.”

While written in quotes it is doubtful that Yulia Skripal expressed any of these words. “At the moment I do not wish to avail myself of their services” is British bureaucratese, not the wording any Russian (or anyone else) with English as a second language would ever use.

The Russian embassy in Britain seriously doubts that the letter is from Yulia Skripal. It notes that despite the claim that Yulia has “access to friends and family” none of her nearest family members, who are in Russia, was recently contacted by her. It also notes a contradiction:

Particularly amazing is the phrase “no one speaks for me” appearing in a statement which, instead of being read on camera by Yulia herself, is published at Scotland Yard website.

“OPCW will produce a complicated report on why the origin of the Salisbury attack cannot be determined. The UK govt will fillet it for individual phrases that out of context implicate Russia, issue a press release and the corporate and state media will scream “It was the Russians”

“Oh look. BBC running with precisely the same propaganda line OPCW confirm “same TYPE OF nerve agent as identified by UK” and the OPCW website has been crashed so we cannot read the actual report.”

And at his website: ‘Yulia Skripal Is Plainly Under Duress’, April 11

“Only the Russians have allowed us to hear the actual voice of Yulia Skripal, in that recorded conversation with her cousin. So the one thing we know for certain is that, at the very first opportunity she had, she called back to her cousin in Russia to let her know what is going on. If you can recall, until the Russians released that phone call, the British authorities were still telling lies that Sergei was in a coma and Yulia herself in a serious condition.”, etc.

There does seem to be a certain amount of international pushback on ‘running to war’, including perhaps Mad Dog’s “US ‘still assessing intelligence’ on alleged Syria attack’, but given Bibi’s still telling Boss Tweet that he won’t allow Iran to get a toe-hold in Syria…it’s hard to imagine the Navy being ordered to turn their armada around, isn’t it?

The current script seems to have been written for some time now, here’s wsws.org’s take:

“In 2013, the United States was on the brink of a full-scale military assault to carry out regime change against Syrian President Assad, seeking to follow up on the 2011 overthrow of Muammar Gaddafi in Libya. But amid overwhelming popular opposition, President Obama was ultimately forced to pull back after the failure of a vote in the UK parliament to authorize British participation in the onslaught. Instead of a direct attack on Syria, the US agreed to a deal brokered by Russia to destroy Syria’s chemical weapons stocks.

In a lecture given in September 2013, in the immediate aftermath of the agreement, World Socialist Web Site Editorial Board Chairman David North warned:

“But the postponement of war does not lessen the likelihood, indeed, the inevitability, of the outbreak of a major war. As the bellicose statements emanating from Washington make clear, the “military option” remains on the table. Nor is Syria the only target for military attack. US operations against Syria would set the stage for a clash with Iran. And, still further, the logic of US imperialism’s drive for global dominance leads to a confrontation with Russia and China.”

“World War III is not about to erupt; it has already begun; indeed, it began as long ago as 2015, when Russia, at the request of the Syrian government, intervened in the conflict in that country, whose government was under attack by Islamist insurgents encouraged, armed, and resourced by the United States and its allies.

Ultimately, the war is a conflict over two types of international order: on the one hand, a hierarchy of states, with the United States at the top, endowed with de facto authority to impose its will on all other states; on the other, a network of sovereign and independent states, linked by mutual benefit—a US-dictated global order vs. a democratic UN-defined international order. This is a battle of tyranny versus democracy at the level of international relations.

The war over these two contending conceptions of how the world’s affairs should be organized—the Third World War in action—is now threatening to spill beyond Syria’s borders.” [large snip]

“The United States’ newspaper of record, the New York Times, urges the US president to commit another illegal act, namely, to punish Syria militarily, without Security Council or Congressional authorization, for an unverified transgression against international law. The New York Times, thus, no less than other major Western media, has chosen a side in World War III—four-square behind the fight for an international order based on the arbitrary rule of the US administration in preference to a global order based on sovereign and equal states governed by the rule of law.

Russia has vowed to intercept incoming US missiles. Its warning has been met by a belligerent reply from the US president. The situation is fraught with danger. The United States, and its major media, which connive in the likely chemical weapons deception and elevate a planned illegal act of war into a moral crusade, are playing a very dangerous game. They’re willing to bring the world to the brink of a general conflagration to fulfil their vision of a hierarchy of states subordinate to the US administration’s rule—an undisputed global US empire.”

What are you seeing?

43 responses to “Updates….while we wait a bit more…[updated at the end of comments w/ airstrikes news]”