I’m here at Santa’s workshop pictured above, attending this year’s World Economic Forum.  While in the background is hovering the Spirit of Oxfam noting that 26 billionaires control as much wealth as poorest half of humanity, we’re here to alleviate some of that poverty, and alleviate some of the jitters you may be feeling over i) globalization, and ii) that robots are soon to replace uneducated workers’ crap jobs, and iii) the global financial slowdown. 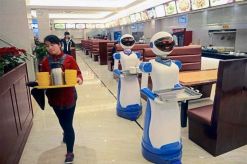 But first, allow me to tell you that my smallish fortune was not due to ‘trampling on the backs of the working class’, or whatever the Commie expression is.  I made my fortune the old-fashioned way: I inherited it.  If that money happens to give birth to more money, so it goes…  And do remember what Mutti Merkel said here two days ago:  ‘The 2008 meltdown was hardest on the banks, and La Garde had said: ‘CEO pay must be reigned in, or people will lose faith in the system’, or close.  She’d also called for more women to be heads of banks, because as we women all know…women are much less rapacious than men.

Which reminds me, the reason I’m still in Davos the day past the Forum’s closing is that my ♥-throb Jamie Dimon is here, and the restraining order he’d taken out on me won’t be applicable here, despite the 5,000 armed troops present.  But his board upped his pay last week to a cool $33 million a year, how fine is that?  Nice blow-job for a job well-done, I say!  Now I’m in a room in the cheap seats, about 935 euros a day, and he’d sexted me yesterday to ask for my room number!

Whoa, I hope he takes me out for sushi and champagne first, maybe some Beluga caviar on toast points.

Anyhoo, #GreenIsIN at Davos this year, because 2019 is a fine time to really get serious about Climate Change.   But some of us even came on commercial flights rather than our own private jets, as many did on the estimated 1500 jets in and out of here during the week.  And woot!  A fleet of Little Audi EVs are cruising around to shuttle us to various locations.  Now the rising star of the Climate Change issue Swedish Greta Thunberg took 32 hours to travel to Davos by train to keep her carbon footprint down, and also to shame others, she said.

Plus, recycled paper is everywhere, from WEF brochures to…well, brochures, anyhoo; maybe #FakeMoney?  And the finest scientists are at work creating better technology for carbon capture, etc. according to the panels.   Germany’s touted Green initiative is that single-use plastic and polystyrene cups will be outlawed by 2020 as long as other worthy options are available; the EU bought the plan…to save the oceans.  Mutti Merkel announced that Germany will have shut down all her nuclear power plants by 2020, there’s no way coal won’t still be a significant source of electrical power in the nation.  I never read the paper on ‘sustainable agriculture’, to say the truth.

‘Mental Health’ issues are also part of this year’s agenda due not only the ‘the human cost’, but because mental illness is expected to cost the global economy an estimated $6 trillion by 2030!

Mental illness is a Signature Issue for Prince William and his Duchess of Cambridge wife, the “elephant in the room” in all the charities he worked with – from addiction and homelessness to veterans’ welfare and young ‘disadvantaged’ people.

So he, and the Duchess of Cambridge, created their Heads Together campaign to ‘lance the boil’ and let people speak and express themselves.  William revealed that not a single celebrity wanted to help his campaign, when he did a big ring round to drum up support.  But once the ball was rolling, and people saw how committed he and Catherine were, some “very brave” people and celebrities came forward to speak out. 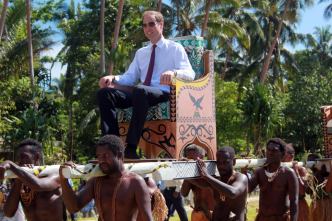 Given the fact that this year’s WEF theme is “Globalisation 4.0: Shaping the Global Architecture in the Age of the Fourth Industrial Revolution”, the panelists are very concerned that the coming prosperity of Fourth Industrial Revolution will be available to all, including the disabled, LGBT, and sundry other groups. And given the fact that China is far ahead in robotics and human-like androids (save for perhaps Japan), 5G phone technology and more, Chinese Vice President Wang Qishan has been the forum’s whipping boy this year, especially George Sorros, as in:

“If they dominated the 5G market, they would represent an unacceptable security risk to the rest of the world’; China is an important global actor’, and that “effective policy towards China can’t be reduced to a slogan”, and “there needs to be a US economic response to the belt and road initiative”, and so on.

Wang’s visionary diplomatic responses to criticism have been enunciated well, as in close to: ‘We need each other to share a brighter future…together’.

Shinzo Abe was apparently the only leader who’s been giddy about the future, given his claims that joblessness in Japan is at an all-time low, and educational achievements at an all-time high.  But then, that makes sense as Tokyo is reportedly vastly remilitarizing (much to the consternation of China and North Korea), doesn’t it? 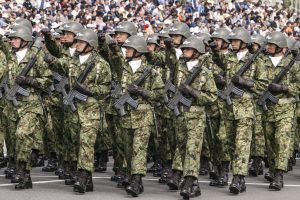 Now there were some protests in Davos, most notably houses decorated in this manner, and a few young socialists protesting the odious Jair Bolsonara.

Greta and allies held a protest outside the Davos gates to much media attention yesterday. 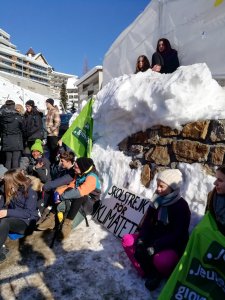 But as far as I know, the raucous Femen hadn’t shown up this year, how disappointing!

Cranky Corbyn had called Crap on six of Theresa May’s cabinet members coming to Davos on the British Taxpayers £s’, but hey: there are deals to be made here, Brexit of No Brexit, right?

Bono the Magnificent White Savior was at Davos again this year, as well.  Bono has changed his tune on the IMF.  He’d announced that he’d once seen it as a ‘great Satan’, due to its emphasis on structural reforms and “bullying of junior economies, but now says the development community “really values” the tough-mindedness shown by Christine Lagarde.  Small wonder then that he and Christine LaGarde had hosted the Sustainable Development panel.

Now I loathe Bono, most especially due to his alliances with the purveyors of the ‘Green Revolution’ who are bio-wrecking the planet (and especially Africa since 2012) with genetically modified food and their related poisons: Gates, Bayer/Monsanto, Cargill, and their ilk in the name of ‘feeding the planet’.  Ergo, I’m in total agreement with George Monbiot about White Savior Bono.  There must be a similar one for Bill Gates and George Clooney, wouldn’t you think?

But now he’s BFFing LaGarde?  Not even your intrepid reporter can abide her and her plundering, ‘structural adjustments or else’ organization; little people matter, too!

Even the Elites at the WEF are discussing what happens when the next economic bubble bursts, Big Name Bankers weighing in on the global state of the economy in 2020, recession or no, or worse.  But remember, they have a stake in it themselves in terms of unsustainable debt levels, and banks having ‘squeezed until there’s no more squeezing possible’.

Microsoft CEO Satya Nadella argued that US citizens deserved the same protection for data misuse as Europeans, and that Privacy is a human right, we need a GDPR for the world, whatever that means.  Not this, I reckon.

But how rich (so to speak) is this?  The Guardian reported that yesterday The final main event of Davos, on the state of the global economy, was underway, but the cavernous congress hall is remarkably empty, as many delegates have already checked out.

Oh, dear; I hope my darling Jamie D. wasn’t one of them!  I have to get to the airport soon!