The Coup against Nicolas Maduro Intensifies

“Washington has imposed sanctions against the Venezuelan state oil company PDVSA, seizing $7 billion in assets, Treasury Secretary Steven Mnuchin said. The US is trying to force recognition of Juan Guaido as president in Caracas.
Munchin said that the move is to “to help prevent the further diversion” of assets by “former president Maduro.”

Sanctions will be lifted upon the “expeditious transfer of control to the interim president, or the subsequently democratically elected interim government,” he added.

“We know what the legitimate government of Venezuela is, and it is our mission to make reality what the people of Venezuela want,” National Security Adviser John Bolton chimed in, standing next to Mnuchin during the briefing at the White House on Monday.

In addition to $7 billion in PDVSA assets in the US, the sanctions will affect $11 billion worth of exports over the coming year, Bolton said.

Over the weekend, the US called a special session of the UN Security Council on the situation in Venezuela, claiming it represented a threat to international security.”

‘UNSC should look into US attempts for coup in Venezuela – Russian envoy’, 26 Jan, 2019 RT

“The United States are trying to organize a coup in Venezuela and the UN Security Council should look into the threat to Caracas, the Russian envoy to the international organization said.

The council gathered on Saturday to discuss the situation in the Latin American country where the opposition leader Juan Guaido declared himself the head of Venezuela with the support of the US and its allies.

Russia and three other countries opposed discussing “situation in Venezuela” saying that saying that the internal situation in the country does not represent a threat to the international community, but Washington’s actions do, yet nine out 15 members voted to put it on the agenda.

The whole UNSC meeting is nothing more than “another element” of the US’ strategy, and an “unethical ploy” by Washington to involve the international body in its regime change campaign, Russia’s envoy to the UN Vassily Nebenzia said.”  (with an epically hypocritical [‘Restore Democracy! screeds]4 minute unembeddable video that TRNN covered, 13 minutes)

“China, Equatorial Guinea, South Africa, Russia, Nicaragua, Cuba, Bolivia, Saint Vicent, the Grenadines, Barbados, and Suriname, were among the countries that expressed their recognition of the legitimate and constitutional Venezuelan government, led by President Nicolas Maduro.

“The United States is the one that should be evaluated (and not Venezuela) for its permanent disrespect and interference in external political affairs,” Foreign Minister Arreaza said in his statement before the Security Council.

“How is it possible that the president of the United States, Donald Trump, who militarily threatened Venezuela, has not been questioned by the world?”

Arreaza also talked about the situation of the illegally and unconstitutionally self-proclaimed “interim president” Juan Guaido, asking, “how can it be possible for a lawmaker to proclaim himself president and for international governments to recognize him?”  Stating and warning that in Venezuela “force is being imposed on the law. That is dangerous and we must stop it here from the United Nations.”

“Bolton isn’t the only one to admit oil is a primary factor in US actions in Venezuela. Florida’s Republican senator Marco Rubio tweeted last week that refining the much-sought after heavy crude from Venezuela already “supports great jobs” for Americans in the Gulf Coast.”

“We are frequently told that people in Venezuela have no food, clothing or toilet paper, and that popular discontent with the left wing government is driven by real hunger. There are elements of truth in this story, though the causes of economic dislocation are far more complex than the media would have us believe.

But I ask you to look at this photo [the featured photo at the top; click for larger] of supporters of CIA poster-boy, the West’s puppet unelected “President” Juan Guaido, taken at a Guaido rally in Caracas two days ago and published yesterday in security services house journal The Guardian. Please take a really close look at the photo. Blow it up as big as you can. Scan individual people in the crowd, one by one.

These are not the poor and most certainly not the starving. As it chances I have a great deal of life experience working amongst seriously deprived, hungry and despairing people. I know the gaunt face of want and the desperate glance of need. Look at these Guaido supporters, one by one by one. This designer spectacled, well-coiffed, elegantly dressed, sleekly jowled group does not know hunger. This group does not know want. This is a proper right wing gathering, a gathering of the nicely off section of society. This is a group of those who have corruptly been siphoning Venezuela’s great wealth for decades and who want to make sure the gravy train flows properly in their direction again. It is, in short, a group of exactly the kind of people you would expect to support a CIA coup.

Those manicured hands raised in the air will never throw rocks, or get involved in violence unless against a peasant strapped to a chair for them. It is not this crowd which will suffer as public disorder is manipulated and directed by the CIA. These wealthy ones are immune, just as Davos serves as nothing but an annual reminder of how very poorly God aims avalanches.

There is real suffering in Venezuela. The CIA is working hard to stoke violence, and the genuine poor will soon start to die, both in those egged on to riot and in the security services. But do not get taken in by the complete nonsense that this is a popular, democratic revolution. It is not. It is yet another barefaced CIA regime change coup.”

“Elliott will be a true asset to our mission to help the Venezuelan people fully restore democracy and prosperity to their country,” Pompeo said in announcing Abrams’ appointment.

He said Abrams would accompany him to the United Nations on Saturday for a Security Council meeting on Venezuela where the U.S. will press other countries to support opposition leader Juan Guaido as the country’s interim head of state.

Abrams, appearing with Pompeo at a briefing for reporters, described the situation in Venezuela as “deep, difficult and dangerous.”

Pompeo said that Elliot’s first task would be to travel to New York and push the United Nations’ Security Council to recognize Guaido as the new president of Venezuela on Saturday. His following duties, said Pompeo, could take him to Latin America.” [snip]

“But Abrams’s record is not limited to Venezuela. His first high profile position started with the Ronald Reagan administration in the 1980s, when he assured military aid to the Guatemalan dictator Efrain Rios Montt, who came to power after a coup in 1982 and was later sentenced for genocide against the Mayan peoples in the Central American country. He was also convicted in 1991 on two misdemeanor counts of withholding information from Congress during the Iran-Contra scandal. However, he was later pardoned by President George H.W. Bush.”

I’ll freely admit that I was startled when I saw this title and author, as Eva Golinger, although being a champion of Hugo Chavez back in the day, had recently been vitriolically opposed to Nicola Maduro, but:  ‘The Dirty Hand of the National Endowment for Democracy in Venezuela’ January 28, 2019, consortiumnews.com, subtitled: Written in 2014 during the Obama adminstration, this article by Eva Golinger gives insightful background to the current crisis in Venezuela and Washington’s role in stirring it up, originally published at chavezcode.com

“Anti-government protests in Venezuela that seek regime change have been led by several individuals and organizations with close ties to the U.S. government.

Leopoldo Lopez and Maria Corina Machado- two of the public leaders behind the violent protests that started in February (2014) – have long histories as collaborators, grantees and agents of Washington. The National Endowment for Democracy (NED) and the U.S. Agency for International Development (USAID) have channeled multi-million dollar funding to Lopez’s political parties Primero Justicia and Voluntad Popular, and Machado’s NGO Sumate and her electoral campaigns.

From my favorite tankie on Twitter: @cordeliers  “Predictably, the Grauniad stands ready to manufacture propaganda on behalf of US imperialism.”:

‘Juan Guaidó: Venezuela has chance to leave chaos behind; Exclusive: self-declared interim president tells the Guardian he is set on forcing out Nicolás Maduro’

“The opposition leader who last week declared himself Venezuela’s rightful interim president has played down fears of a possible armed conflict and claimed his economically devastated nation was living through an “almost magical moment” in its newly revived quest for democracy.

In one of his first interviews since last Wednesday’s surprise move, Juan Guaidó told the Guardian he was set on “getting the job done” to force Nicolás Maduro from power and ending a humanitarian emergency which has fuelled the largest exodus in modern Latin American history.

Guaidó said a combination of international backing, opposition unity and a reinvigorated grassroots support meant Venezuela now had a unique chance “to leave the chaos behind”.

He also announced on Sunday that he will step up his push for power by holding rallies on Wednesday and another on Saturday, when the ultimatum from leading European countries is set to expire.”

“The Venezuelan Foreign Minister Jorge Arreaza responded to a statement by the European Union which issued an ultimatum to the Venezuelan government to hold elections within eight days. He asked them to drop the measure that would recognize Juan Guaido, opposition leader for the Venezuelan National Assembly, in contempt since 2016, who unconstitutionally declared himself “interim” president, as Venezuela’s leader.

Arreaza repudiated the European Union and said its declaration put them in the same camp as the United State-backed coup that has been in progress, most forcefully since Jan. 23, but which has been ongoing for years, since the Hugo Chavez administration:

“The Bolivarian Republic of Venezuela expresses its most forceful rejection of the declaration by the European Union of Jan. 26, through which it has demonstrated it’s signing on to the coup d’etat orchestrated by the United States government, and which has the intent of giving an ultimatum to the Venezuelan state, which is befitting of the old colonial powers it represents.”

Via the Popular Resistance newsletter, Zeese and Flowers offer: ‘Venezuela: What Activists Need To Know About The US-Led Coup’

“The Maduro government has waged a violent crackdown on Venezuelan civil society, violated the constitution by dissolving the National Assembly and was re-elected last year in an election many observers said was fraudulent.”

It’s all excellent, although their lists of Guaido supporters and opponents are a bit out of date. 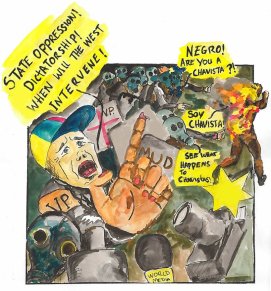 Like Loading...
This entry was posted in ****Creative Commons, capitalism and anti-capitalism and tagged coup against nicolas maduro. Bookmark the permalink.

18 responses to “The Coup against Nicolas Maduro Intensifies”